Perry Mason And The Case For Same-Sex Marriage 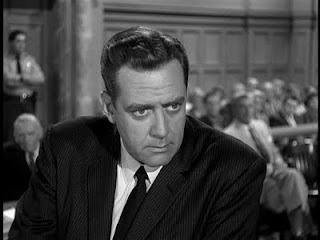 Classic episodes of Perry Mason have been irresistible to me for about 25 years now, since high school.  Its predictability was part of its appeal, strangely enough.  Episode after episode, the famed Los Angeles attorney, his secretary, Della Street, and private eye Paul Drake would come to the aid of someone falsely accused of murder.  Forty-five minutes' worth of cool cars, Mad Men wardrobes and fresh-off-the-bus-from-Kansas starlets later, Mason would extract the truth from the real culprit.

Indeed, Perry Mason was all about justice, no matter how damning the evidence seemed, or how little money the defendant had.   In turn, actor Raymond Burr became synonymous with justice with his iconic portrayal of Earl Stanley Gardner's legendary character.

Offscreen, Burr's philanthropy and humanitarianism was impressive, and well-known.  His beneficiaries included countless law students and numerous needy children.  He had the strongest of work ethics, and was reportedly widely admired by Perry Mason's cast and crew.  Barbara Hale (Ms. Street), for one, remained loyal to Burr until his death.

I write about Perry Mason today because, during Gay Pride Month and in the wake of the fortuitously timed legalization of gay marriage in New York State, I must confess that — of all people and situations — it was  Perry Mason who prompted me to fully accept the concept of a same-sex union.

You see, Mr. Mason, defender of so many damsels in distress, was homosexual.  Raymond Burr, to my astonishment, was a gay man.

I, like most others, did not learn of this fact until years after Burr died in 1993, at age 76.  According to various articles and two biographies, the very private actor fabricated some of his personal life, including possibly more than one marriage.   In the innuendo-only Forties, Fifties and Sixties, the idea of an openly gay celebrity was obviously unthinkable; you couldn't even get Liberace to address the subject.   And for good reason.   Twenty-five years after the public learned of Rock Hudson's preferences, the revelation of an actor's homosexuality still prompts a scandal of minor or major proportions... somehow.

Burr reportedly willed the bulk of his estate to his dedicated, yet secret partner of thirty-plus years, who was at the actor's bedside when he passed. 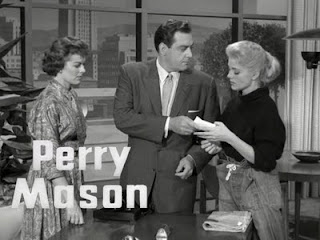 I grew up in the Seventies and Eighties, when the terms "homo" and "faggot" were almost as common in school hallways and playgrounds as "dork" or "loser."   That's a difficult environment to forget, especially with my Don Rickles - inspired sense of humor.  Though I've never been on a mission to prove my heterosexuality, you've never seen me at a gay bar or on the sidelines at a Gay Pride parade, either.  You still won't, even though I have gay and lesbian friends... not acquaintances, but friends.   Though some of my favorite actors and musicians are gay or lesbian, I will still avert my eyes from two men kissing on television, or in public.  I can't help that; human sexuality has been and will always be a tricky, often unfathomable subject.  It certainly makes for some interesting contradictions.

Today, it's odd to think that I had to learn, over time, that a person's sexual preferences — which are often cast not in black & white, but in varying shades of grey — aren't any of my business.   They're not anyone's business.

Opposing same-sex marriage, to me, is not a vote for decency, nor is it a "nay" vote for granting "special privileges."  It is a vote to marginalize and demonize someone — a bus driver, a soldier, a schoolteacher, an actor — for what they might choose to do in the privacy of their home.  Let's not pretend it's anything else.    Let's not pretend that this legislated prejudice doesn't trickle down to the bullying of gay kids, or doesn't translate into denying someone other freedoms and/or opportunities.  Marriage is often overrated, but human beings are technically equal under U.S. law, and everyone should have the right to be as potentially foolhardy as the next hooplehead.   Life is hard enough without our government and our religions judging our neighbors, family and friends by who and how they love, for god's sakes.

Ah, the elephant in the room.  If one's god dictates that someone made in His image is wrong, even Hell-bound, for loving another person... then perhaps one should reconsider his choice of deity.  Church leaders who want to legislate "decency" should be using their considerable political influence to ensure that the poorest among us can afford food, housing and a doctor.  That's decency.

It's time for evil distractions to cease.  It is past time to officially ignore those whose ridiculous upbringing in fear and ignorance has caused so much pain for others.  Cops no longer assault and courts no longer incarcerate our neighbors for their sexual preferences.   Let us, state by state, take the next magnanimous step and seat the busybodies, the charlatans, the fear-mongers and the apathetic in the back of the bus for a change.

We can discuss this topic forever.  In the end, though, it all boils down to Perry Mason, to Raymond Burr.  I know that it's a simplistic, perhaps odd example.  However, it's shamefully sobering to consider that a man of such fine character had to hide his identity, had to hide his lover and companion from the world.  Even more importantly, the irony that our society decided Burr was not fully entitled to the justice he so memorably championed is not only sad, it's also so very, very wrong.

I very much appreciate your blog entry. It's very heart wrenching to see people not only have to deny who they are to the outside world, but so often feel like they have to deny it to their own self.

It will always be a struggle, but one person at a time the dominoes of social oppression may finally fall.