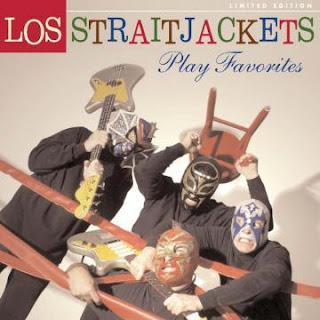 In an open letter on his website, Amis, AKA "Daddy O Grande,"  mentioned his stem cell transplant procedure, and a recuperation that is expected to last through the summer.  The procedure is expected to knock the cancer into remission.

Amis had no health insurance, but was partially covered via The Affordable Care Act.  As one might expect, the ongoing out-of-pocket expenses are staggering.

The benefit gigs will be interspersed among a heavy summer touring schedule (which includes a number of gigs with Dave Alvin), and a slew of guest appearances have already been slated - with more doubtlessly to come.  The band has enlisted Greg Townson (dubbed "Gregorio El Grande") of the Hi-Risers to step in for Amis.

Revered by their fans (i.e, anyone who has ever heard or seen them), Los Straitjackets' in-turn reverence for all who came before them is even cooler than their Mexican wrestling masks and super-abundance of talent.

Direct donations can be made through www.daddyogrande.com.  Tour dates and news updates can be found at www.straitjackets.com.