Checking out the Congress Hotel 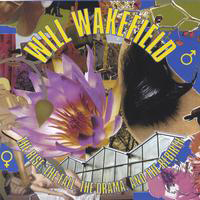 
by Steve Stav, for the Ballard News-Tribune, Seattle, 2001.

"At first, I got all my friends to show up; but now, I'm starting to see people in the audience that I don't know." After a late rehearsal last week, bleary-eyed singer-songwriter Will Wakefield was re-living a watershed event in his band's career: Will Wakefield and the Congress Hotel recently opened for local rock powerhouses Left Hand Smoke at the Showbox.
"We wound up having two to three hundred people showing up for a nine o'ciock slot on a Friday night, which is usually pretty tough," he said.
"Will told me that the band could draw quite a few people, but I was amazed at just how many actually showed. He hasn't gotten any press to speak of," Left Hand Smoke manager John Shoemaker had marveled after the concert.
Wakefield recalled that "it was also a terrible, rainy night; I don't know why anyone showed up. Maybe we were lucky."
Every musician's success has an element of good juju involved, but in 26 year old Will Wakefield's case, not much luck is needed. A talented storyteller, Wakefield has 14 years of music-career training — the book-and-lecture variety as well as hardscrabble club-gigging — behind him.
Growing up in the Highway 2 hamlet of Sultan (where his parents continue to operate the landmark Dutch Cup restaurant) and neighboring Monroe (then a rural prison town), the aspiring musician was entranced by the vibrant Emerald City music scene at a young age.
Playing guitar in a hard-rock band, Wakefield began playing Seattle venues while in high school; he then immersed himself in a completely different environment — the eye-opening East Coast — while attending Boston's Berklee College of Music.
Wakefield looks back upon the experience with fondness. "As opposed to other big schools like Juillard, where they try people out and get the best of the best," he said, "Berklee uses the 'shotgun method,' where just about anyone can enter, they'll take your money. It's tough for those who aren't suited for a university-type of education. A lot of people drop out after the first semester, but it's a great school."
The singer/guitarist stayed two and a half years, then returned to Seattle and took general classes at the University of Washington, earning a degree in music business from Berklee. Wakefield then got a job with Sub Pop records, which he received a hands-on education in the touring and financial aspects of the music industry.
While at Sub-Pop, he recorded a solo debut, 2nd & Hayes, and began playing small acoustic gigs around the Jet City. However, Wakefield soon realized that he wanted to play in a band, and not just any band. He had long admired groups like U2 and Van Morrison's band — groups with a great sound that didn't overshadow the lyrics and emotion of the song. About a year and a half ago, Wakefield discovered a band heading in that direction, albeit lacking a frontman/songwriter.
That group now bills itself as "Will Wakefield and the Congress Hotel."
"I brought my mellow-rock stuff to these guys, and they built this big rock sound around them," the songwriter says of the trio, which is made up of veteran drummer Kevin Hartsock, bassist Mike Stewart, and lead guitarist (and Wakefield's cousin) Chuck Edwards.
Developing an approach that is as intricate as it is rock-raucous (imagine early Steely Dan and a late-'70s Lou Reed), Wakefield & the Congress Hotel soon began their word-of-mouth campaign, culminating in that dazzling night at the Showbox.
Wakefield and company are wrapping up production of an EP of fan favorites (two of which, "Battery Street Tunnel" and "Frankie the Drifter," have "heavy rotation" written all over them). According to Wakefield, the disc will hopefully spark a West-Coast tour and grab the attention of major labels — though he's too experienced to begin counting chickens.
"I'm getting happier and happier with the band's sound, and I'm getting more confident in my storytelling," said the affable frontman. "I think our goal now is to just get as many people in front of us as possible. If they don't like our stuff, that's Ok. I just want them to give us a listen.
"We started out with our friends and our families as our audience," he concluded with a chuckle, "and now there's people coming to shows now that aren't obligated to be there — which is a nice step in that direction."
Will Wakefield • The Rise, The Fall, The Drama, and The Rebirth • 2004 • Wakefield Records