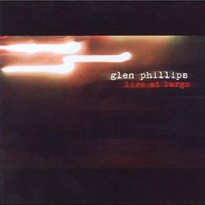 
By Steve Stav, for the Ballard News-Tribune, Seattle, 2003.
"It was something I wanted to explore, and a necessity," says singer-songwriter Glen Phillips of his post-Toad the Wet Sprocket, solo-acoustic act. "If I tour with a (backing) band, I don't get to pay the mortgage; if I tour solo, I can make a living," he added, chuckling.
Phillips, 32, is still going through the time-honored process of coming to grips with the breakup of a band. His struggles are a little more unique than most of his former frontmen, now solo artist peers, in that he spent half of his life with his band, a group that reached awe-inspiring popularity levels and chart positions.
Phillips was a-high-school freshman when Toad was spawned from a group of drama students (the other three were seniors); in 1988, the enterprising quartet sold their self-produced first album, a tape, actually -- around their hometown of Santa Barbara, until it caught the attention of Columbia Records. A decade of albums followed, with radio-friendly songs such as "All I Want" and "Fall Down" propelling the band to international stardom.
His early "do it yourself" experiences and education came in handy when Phillips launched a full-time solo career after Toad's breakup in 1998, though the singer admits that he "also got very used to being 'taken care of' by the end of Toad." He adds, "After that, I wasted about a year with management telling me to write the 'no-brainer' so I could do the song that wouldn't be anybody's actual favorite, but one that an A&R guy might like, so I that I might get signed -- even though I was old, old, old at 30."
After a moment's contemplation, the affable husband and father of three says, "I've been forced into the conclusion over and over again that the only way to make anything happen is to do it myself. Which is difficult for me, because I don't like being a businessman. With Toad, all I had to do is write songs and sing them!
Phillips was recently thrust back into the role of superstar-band-frontman when he and his Toad bandmates reunited for a Santa Barbara benefit show. One concert turned into several, and then the affair snowballed into a 24-date, late-winter tour. Though the singer-songwriter obviously enjoyed playing again under a much larger spotlight, Toad's shaky undercurrents soon reminded him of how the group dissolved to begin with.
He explains, "We broke up for the same reasons that break most bands up: egos, entitlement, irreconcilable differences, you name it. Enough time had passed that we thought it was possible [to work together], and everybody was a lot more grateful for what we had had... but I felt like I spent a lot of time putting out fires. I'm sure the other guys could give you a laundry list of what I did to make them angry!
"They're all fine guys," the singer quickly adds, "We gave it our best, but I don't think it's 'doable' again... It was great for everybody to get a little touch of the past, but there wasn't a lot of passion for moving forward."
Phillips, having re-adopted that "DIY" attitude, is constantly moving forward. His new CD, Live at Largo, will, with any luck, accomplish two enviable goals: to satisfy his legion of Toad fans, and to introduce himself to an audience wholly unfamiliar with his previous work.
In a set sandwiched and peppered by elegant somberness -- Greg Brown's "Small Dark Movies" and his own "Sleep of the Blessed" bookend the disc -- Phillips dazzles the listener with his inventive songwriting and prowess with acoustic guitar. With an earnest and unpretentious voice, he breathes life into the usual gamut of themes -- from love and loss to missed and realized opportunities. However, the singer shines brightest when he's tackling shades-of-Billy Bragg, front-porch social commentary, laced with a humor entirely his own.
Phillips' instant classic, "Fred Meyers" -- a post-apocalyptic vision of suburbia, where large chain stores have been converted to communal living spaces -- is a prime example. Another standout is "Drive By," a suburban Gothic tale about a boy forced to accompany his father on a mission to eliminate a troublesome neighborhood dog. Simultaneously horrific and hilarious, the song was inspired by a story once told to Phillips by his friend Ben Folds.
The troubadour has also recently taken a solo stab at songwriting for film -- he was commissioned to write the song, "Departure," for James Cameron's Titanic documentary, Ghosts of the Abyss. The experience emboldened Phillips, who says, "There's fewer and fewer pieces of good music on the radio -- it's a very narrow point of entry and very expensive right now. The great thing about film and TV stuff is that they pay you, and pay you well."
He continues, "There is a demand for unsigned artists without big publishing deals, because the major publishing companies are really expensive to deal with.
“Look at Aimee Mann -- she's an indie artist who got a huge piece of the 'Magnolia' soundtrack."
Right now, his reputation as chart-topping frontman is an inescapable one. But does Phillips yearn for the day when his concert handbills can omit the words "Toad the Wet Sprocket"?
"Absolutely. There's nothing wrong with it, I'm really proud of what we did," he emphatically states, adding, "I realize that I haven't put out enough material -- I've recorded four albums and released two. So, I haven't proven myself to the outside world in any way. But to feel good about what I'm doing [solo], that's enough for me."
Glen Philips • Live at Largo • 2003 • A2. Management