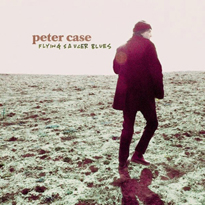 • An interview with the former Plimsouls frontman


Throughout his career, Peter Case has followed his own intuition, and the Midas-like results have always left the genre-hopping singer/songwriter sitting pretty.
Most music aficionados over the age of 25 remember Case as the rough-voiced frontman for the semi-legendary Plimsouls, whose 1983 album Everywhere At Once was considered by many to be among the best of the decade. Before that, he was in another L.A. group -- the Nerves, a groundbreaking punk band. And before that effort? Case started his musical odyssey by playing pretty much what he's been performing over the 15 years since the Plimsouls initially broke up -- folk and the blues.
Sound a bit far-fetched? Not really, when you consider that Case considers himself to be an American songwriter first and foremost -- to him, a style of music is simply a tool to get his ideas across. Case conveys his thoughts magnificently on his new CD, Flying Saucer Blues, an instrumentally rich departure from the bulk of his raw earlier works. Admittedly inspired by the Beatles' later forays into country-folk music, the album also draws from the workingman blues of Case's youth.
SS: We've had Tim Finn, Lloyd Cole, Stan Ridgway and Colin Hay - all singers who fronted bands in the '80s - roll through Seattle over the past six weeks. How does it feel to be a trendsetter for the pop star turned singer/songwriter movement?

Case: Yeah, I guess I was probably the first guy from that whole gang to quit my perfectly good rock band and go solo. For me, it felt really natural, it was something I had to do, it was dictated by the songs. The band was still gaining altitude, actually. Some people thought I was nuts to break it up, but it was sort of one of those musical decisions. I guess these days the label would have encouraged me to try to do both, but back then I felt that everyone really laid it on me -- I had to choose one direction or the other. I felt that I needed to write the songs I was supposed to be writing -- "true writing," the story-songs that popped up on the first album.
SS: Commercially that was certainly a bold move to make, embracing folk and blues in the mid-'80s. Was there ever a time where you were discouraged enough to think about quitting and trying something else?

Case: No, I had a really strong feeling that I was doing what I was supposed to be doing. It hasn't been easy, though. I've always been a musician, only for a few years I was in any sort of limelight. I used to be a street musician, and now I play these shows ... it's like I'm coming onto the radar of people who want to hear this sort of thing now.
SS: It must be nice to reach point in time where you have some people coming to your shows that have never heard of the Plimsouls.

Case: Yeah, that's been going on for a while now. There was a break ... I took some of the Plimsouls fans with me, but a lot of them just couldn't make the leap. It just might not a natural leap for everybody, but it was a natural leap for me, coming from where I came from. For a lot of the fans out here in California, they might not have gotten it. I had to build up a whole new thing. So, really, from the first album onward, there was a lot of people that liked it that never got into the Plimsouls. I feel that what I do now is a lot stronger than the Plimsouls. The Plimsouls were my first attempt to put anything together... it had a lot of power to it, we were a great live band, but I've written better songs than "A Million Miles Away."
SS: I read that you journeyed to North Beach as a teenager. People always associate San Francisco with psychedelia, but there sure was a lot of folk music there.

Case: There were a lot of folk musicians and blues musicians... You know, Sonny Terry and Doug Sahm were living there at the time, Jorma Kaukonen, the guys from the Charlatans as well. There, was a great folk club called the Coffee Gallery, which was the first place I played... an incredible scene of street musicians, a lot cooler than it is now. It was very exciting around '73.
SS: Growing up in upstate New York, did you ever see Dave Van Ronk play?

Case: Yeah, I saw Dave Van Ronk and other artists that were lesser known, like Cedric Smith, people from Canada... there was this whole folk scene up in Canada. I used to take off from home and hitchhike up to Ontario and see these guys. I also used to hitchhike to Boston, and see people like Lightnin' Hopkins play. There was this traveling R&B scene back then, these road shows that would come and play a while. Guys like Muddy Waters, or the Bo Diddley Band or Charlie and Inez Foxx, they would come to Buffalo and stay a week, play two-three sets a night ... that was a lot cooler than these onenighters.
SS: Do you still look for inspiration in old albums?

Case: Yeah, I do, actually. Especially the old blues guys... for years, I've listened to Sleepy John Estes, and I just re-purchased this album that I've had on vinyl forever.
SS: I've never heard of Sleepy John Estes.

Case: You've never heard of Sleepy John Estes? Dude, order this record called Broke and Hungry on Delmark. It's one of the greatest blues albums ever made. It's recorded as if Memphis was on the Nile or something.
SS: You're an excellent storyteller, which implies you're a good listener. Whose stories do you enjoy the most these days?

Case: I don't know, man... most of the stories in my songs are from people I know or things I've seen happen... like the story on my new album, "Two Heroes," that happened in the building a little while back, this guy I was writing songs with, he was the guy that broke up the robbery and went to jail. I had to listen to myself tell that story a few times, in different bars and places, until someone told me I had to put that to song.
SS: Are you touring solo, or will you have some accompaniment?

Case: I'm with my fiddle player, David Perales, he sings and plays violin, he's from San Antonio. He's a really great fiddle player with a deep tone, and he sings harmony as well.
SS: You recently met Sir George Martin (he performed with Martin and an orchestra). Have you ever met Sir Paul, or the most overlooked Beatle, George Harrison?

Case: No, I haven't. But I am really influenced by the Beatles on this record. I think part of it was due to that show with Martin, and hearing those songs, and singing them with all those people at the Hollywood Bowl. It really moved me -- the Beatles had a way of being deep and catchy at the same time, and that was what I was trying to catch on this album.
SS: Perhaps Lennon provided the "deep" and McCartney supplied the "catchy."

Case: I'm not so sure of that. I think Paul, in many ways, is a pretty powerful songwriter. The best song the Beatles ever wrote, in my opinion, is "Penny Lane" -- which I believe is Paul's song. It's inspired by Lennon, it's about his neighborhood... but it's possibly the closest they came to writing a Dylan-esque lyric, held together as in a poem.
Peter Case • Flying Saucer Blues • 2000 • Vanguard Records