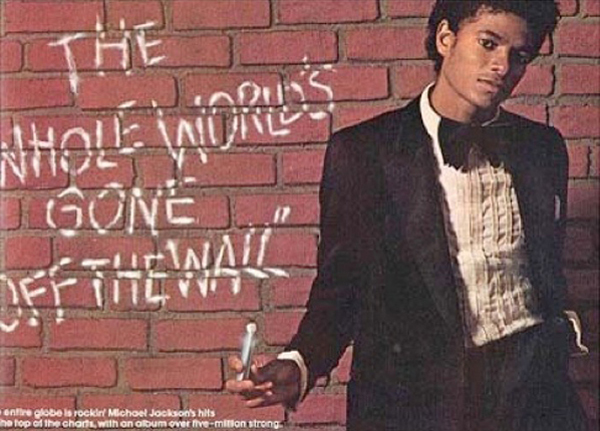 Of all the unforgettable music moments captured on television, a handful truly stand out: Elvis' and the Beatles' Ed Sullivan appearances, Madonna not-so-virginally writhing on the ground at the MTV Music Awards, and Michael Jackson breaking into the moonwalk at the Motown 25th Anniversary Special.
The latter performance is the first thing that comes to mind when contemplating Jackson's legacy, a day after his death. The Thriller premiere was a huge, huge event that epitomized the effect of the music video, but Jackson's first TV moonwalk — people went out of their minds when that occurred. Unbelievably influential.  The next morning, people all over the world were trying to imitate his moves, and that backwards glide.
Jackson had dazzled us with Off The Wall, but this was something entirely different. He had a new look, new choreography and a new sound that was instantly omnipresent. The Thriller album was on fire for more than two years — seven singles!  And "Billie Jean," with that moonwalk... that was the groove of the decade.
And, like witnessing Elvis' "Don't Be Cruel" and the girls screaming for McCartney, you had to be there on May 16, 1983 to grasp the enormity of Michael Jackson's impact, this unbelievable display of talent.
I'm not the only one today choosing to ignore the past 20 years and remember a man at his most glorious.
Posted by Steve Stav at 8:17 PM No comments:

Above anyone else, Bob Bogle made me feel that I had made the "big leagues" as a music journalist. Ten years ago, I interviewed Bob and Ventures bandmate Don Wilson by phone for a story for The Rocket; they were to play a gig in Seattle, and I later arranged to meet them for the sound check and say hello to the rest of the band.
When I caught up to Bob that afternoon, he reached into his wallet, unfolded a piece of paper, and asked if he had gotten my number and address right when we had talked earlier.
Bob Bogle, rock 'n' roll legend, had my name and number in his wallet! I had made it! I told that story for years afterwards. The truth is, I was nobody special, but Bob made every journalist, fan, and fan/journalist feel important. In a band filled with the most gracious musicians one could ever meet, Bob was the nice guy. In a group of humble giants, he was the most humble. A guitar player's guitarist, he achieved a popular version of the American Dream: he was a construction worker with very meager beginnings who became one of the most-heard rock musicians in the world.
And now he is gone, and I am crushed. I knew Bob was very sick, and I thought this day might very well come, but the news of his death has hit me harder than I expected. Or I'm just selling Bob, and myself, a bit short. After all, I've been a Ventures fan since birth, and the privilege of catching a few minutes' worth of conversation with Bob Bogle here and there over the past ten years — well, that tops just about anything I've ever achieved as a writer.
I've enjoyed chatting and interviewing every member of the Ventures, but backstage, somehow I always eventually gravitated towards Bob. Everyone did. Mild-mannered, he was nonetheless a great storyteller, if asked. Before a show, he was often seated away from hustle-and-bustle in the room. Bob once told me, as he approached 70, that conserving energy was the key — in other words, he saved it for the stage. Oh, Bob had a sense of humor. I recall during that first interview how he and Don were explaining their decades-long relationship. They were best friends who never fought.
"We're not gay or anything," Bob added, "just best friends."
Professionally speaking, Bob Bogle was a supremely influential and very skilled guitarist, though he was more well-known for his bass playing and songwriting. He and Don, performing as a duo on that famous first tour of Japan, introduced the electrified rock 'n' roll guitar to that country. The two defined the relationship of lead-and-rhythm guitars in a rock band, and anyone who has ever caught a Ventures show could tell he enjoyed playing lead guitar — he would perform a couple of numbers, with Nokie Edwards or Jerry McGee switching to bass. However, Edwards and McGee were more accomplished players. So Bob simply became a great, great bassist, the band's anchor. A practical, humble man.
Bob told me on several occasions that he could never imagine retiring, could never imagine not being a Venture. And he got his wish. To my knowledge, Bob had spent time in a recording studio every year for almost 50 years. Amazing feat, amazing man.
I once prepared a sandwich for Bob Bogle, rock 'n' roll legend. I've occasionally let that tidbit drop ever since the first story got old. I think I will boast about both "events" from now on. After all, Mr. Bogle, a man who never forgot where he came from, somehow made everyone feel that they had made it, too.
My heart and thoughts go out to Bob's wife Yumi, the band, longtime Ventures manager Fiona Taylor, and especially Don Wilson, who was at his side for more than 50 years.
Photo: Bob Bogle, Steve Stav and Don Wilson, June 1998.
Posted by Steve Stav at 6:21 PM No comments:

Ah, we're back -- my Webmaster has fixed some technical issues, including the all-important ability for you to comment on my meanderings and sketchy work... see below.
New in the archived Aural History section are 2000 interviews with Dave Dederer, Sushirobo, Deke Dickerson, Dorkweed and my first chats with Dave Alvin and Tim Finn.
The Finn feature has particular sentimental value to me. Done to promote his beautiful Say It Is So album and an upcoming gig at Seattle's Tractor Tavern, it proved to be a revealing conversation with one of my teenage "New Wave" idols-turned-favorite singer-songwriters. Super-nice, down-to-earth gentleman with an amazing talent and great voice.
Interestingly enough, my future wife was at that Tractor Tavern show -- I hadn't seen her since 1987, when we parted ways in college. And I didn't see her at the gig, either; while she filed out of the club, I went backstage to sit with Tim on the Tractor's loading dock. No matter, the stars eventually aligned themselves.
The photo here of Andrea and Mr. Finn was snapped by me, backstage at the Paramount Theater after a 2004 Finn Brothers concert. If she looks a bit giddy, it's because she was.
Posted by Steve Stav at 11:34 PM No comments: