Paramount has just released a final, full-length trailer — and a new poster — for Captain America: The First Avenger.  The comic geek in me is salivating in anticipation, even though the clip/highlight reel still leaves questions yet to be answered.   Marvel fans will just have to wait until July 22 to see if there's an all-important good script to match the period cinematography, and if the relative lack of star power (Tommy Lee Jones excluded) will be a plus or a minus.  Oh, and there's that little bit of odd casting to swallow —  actor Chris Evans (The Fantastic Four's Human Torch) is now playing Steve Rogers, aka Captain America.

This effort certainly has a lot going for it: The film appears to stray very little from Cap's classic origin story, and everyone loves a WWII film.  There's the Red Skull, Nazis, even The Howlin' Commandos... most of the essential elements seem to be in place.

Given that Captain America is the "rock" of the Marvel Universe, it's odd that so much time passed before a studio spent any real money on a film adaptation.  The super-patriot has had to weather a by-the-numbers 1940s serial, two crummy 1979 TV movies (in which actor Reb Brown tooled around in a date-rape van and a dirt bike), and a feature film starring J.D. Salinger's son that was so weird and cheap, it bypassed U.S. theaters.

With three solid superhero flicks ahead of it this year, there's a lot at stake... and a lot of competition in a busy blockbuster season.  My fingers are crossed, for Cap deserves some glory.
- Steve Stav 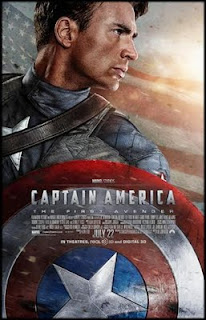 http://www.facebook.com/CaptainAmericaMovie
Posted by Steve Stav at 3:13 AM