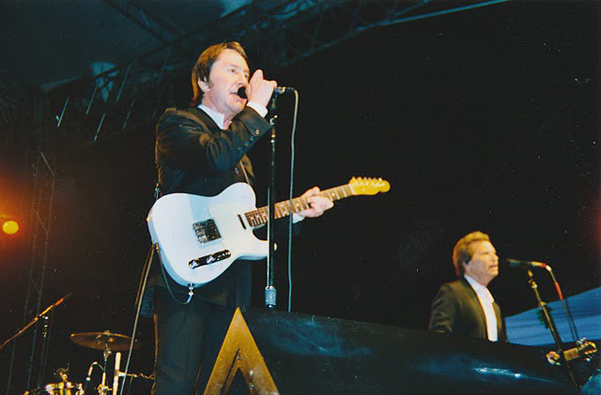 If you were alive and cognizant of your surroundings in 1979, you couldn't escape the pounding bass of "My Sharona." Everyone on earth seemed to follow the album's advice, and got The Knack — you couldn't listen to a radio for an hour without hearing them.

(NPR piece that included an interview with Sharona.)
Posted by Steve Stav at 5:35 PM No comments:

Embracing War-era music, August Darnall (aka Kid Creole) was a man ahead of his time. Commanding a stage filled with horns, rhythm and scantily dressed backup singers, the frontman's frenetic act pre-dated the swing-craze revival by almost 20 years.
And man, was it cool.  Cool – and unusual – enough to garner occasional airplay on Seattle's alternative music stations in the early 80s. An even more occasional appearances on MTV prompted more attention from American suburbia, though I have a hunch that Kid Creole's street popularity peaked on the East Coast and in Europe.
"Endicott," "Annie, I'm Not Your Daddy," "My Male Curiosity," "Caroline Was a Dropout," "Stool Pigeon"... the mix of funky R&B with Cab Calloway, 1940s jumpin' jive was irresistible, and reportedly was on Prince's turntable quite frequently. Though I had heard him on the radio, I first saw Kid Creole in action in the film Against All Odds, in a nightclub scene performing "Lifeboat Party." I was hooked, as the full Kid Creole experience combines the audio with the visual.
This live version of "Lifeboat Party" (seen above) is from 1985's Leisure Tour.
As we all know, sometimes an artist is too hip, too cool, too influential to reach the heights that their successors do, and such was the case with Kid Creole. Stuck somewhere on the dial alongside the Human League and Cyndi Lauper back in the day, the impresario was alone on a funky island of panama hats and wide silk ties. However, he never really left the room – Darnall and his Coconuts still perform occasionally, and an anthology was released in '09.
Posted by Steve Stav at 6:38 PM No comments: