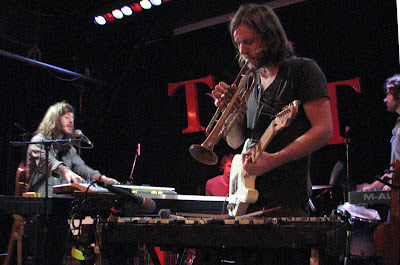 Other Lives can't resist putting on a show, even when they're supposed to be taking a break.

The folk-rock mini-symphony from Stillwater, in between an opening-slot tour for Bon Iver and a similar one for Radiohead, performed at Tulsa's Fassler Hall in January.

Under The Belfry has released seven tracks from the concert, all free MP3 downloads.  For their fans, it's a surprise gift; for the uninitiated, an introduction to one of the most remarkable breakout bands of 2011, whose live performances rival their studio accomplishments.  The quintet's mood-setting, unbelievably atmospheric disc, Tamer Animals, was my favorite of the year.

The album has proved to have more legs than a bionic centipede... the workaholics have been promoting it via a pieced-together world tour for about a dozen months now; they're still on the road with Radiohead, and will be appearing at Coachella.

Posted by Steve Stav at 2:07 AM No comments:

One Of These Items Does Not Belong. 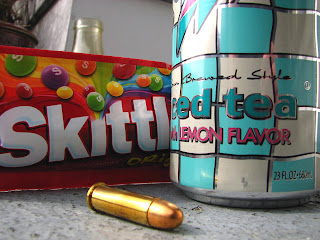 Justice for Trayvon Martin.  Justice for everybody.
Posted by Steve Stav at 1:52 AM No comments: 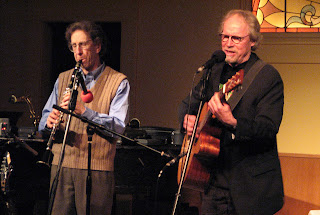 The very best singer-songwriters are mood-shifters, magicians, musicians with the ability to transmute words into feelings, to transport a listener to another time and/or place.

Danny O'Keefe has certainly conjured up some lasting spells over his nearly 50 years of performing; last Saturday night at Snohomish's Tim Noah Thumbnail Theatre, he proved that his sleeves still had plenty of tricks and tales tucked into them.

O'Keefe, best known for the classic American lament, "Good Time Charlie's Got The Blues," took a sold-out audience to New Orleans, to the Mississippi Delta, to Eastern Washington's dusty roads — and to the sleepy front porches of its orchard country.

And that was just in the first song or two.

A product of the 50s who honed his craft in the 60s and began garnering worldwide attention in the 70s, O'Keefe's compositions are truly timeless, the result of being a lifelong student of roots music, of jazz and rhythm 'n' blues, of the music that people once sang to themselves as they plucked apples or picked cotton.

At O'Keefe's side this night stood fellow student Joel Tepp, a Seattle musician who's served as wingman and session ace for dozens of artists, but seemed destined to be paired with this particular singer often over the last decade or two.  They're a perfect fit; Tepp is one of the best accompanists in the country.  Many multi-instrumentalists are dabbling jacks-of-all-trades; Tepp's a master, especially when it comes to slide guitar. 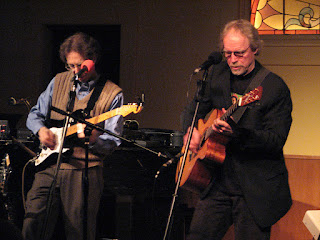 O'Keefe's still-strong, instantly recognizable voice and well-practiced guitar, along with Mr. Tepp's accents and embellishments (including oboe, mandolin and harmonica), wove their way through a mighty impressive back catalog.

"Magdelena," "So Long Harry Truman," "Steel Guitar," "Last Call," "The Road"... newer material was presented during his two sets, but O'Keefe seemed to visit his early years with Atlantic Records more often.  It didn't matter, for in this stripped-down, intimate setting, "timeless" took on a second meaning as the evening progressed.

While I was sitting in the pews of this apparently converted funeral home, soaking up this typically fantastic Danny O"Keefe show, I thought of the infamous enigma of his career: why his records for Atlantic weren't a springboard for superstardom.  Oh, over subsequent years O'Keefe made some excellent albums, but for all their qualities, the recordings sometimes didn't do his talent justice.  For a long time, he darted in and out of the spotlight, writing many songs that superstars liked enough to cover, but "household name" status somehow eluded him.

There's doubtlessly plenty of reasons for this... one of them being that O'Keefe is almost impossible to classify, in a tag-obsessed world — Folk-rock?  Blues?  Country?   However, as O'Keefe leaned towards the tin can this night to sing classics such as "Outlaw" and "Pieces Of The Rain," another obvious answer came to me, a solution to a dilemma many singer-songwriters face as they try to present themselves to an often-fickle, flavor-of-the-month, record-buying public.

With few exceptions, all O'Keefe needed over the past few decades was a microphone and a recorder.  And, perhaps, an accompanist like Joel Tepp.   Various production styles, top-notch rhythm sections, keyboards, backup singers — all largely unnecessary touches that sometimes obscured the magic.


From your friends at the Weinstein Company, verbatim :

NEW YORK, NY (March 13, 2012) – “BULLY,” the highly anticipated anti-bullying documentary (in theaters March 30th), has sparked a protest and now a movement, as a number of major movie stars, theater owners, and Members of Congress have joined forces to protest the film’s R rating. In a clear triumph for the film, Gerry Lopez, CEO of AMC Theaters, one of the most prominent theater chains in the world, spoke out against the R-Rating, saying, “To 'automatically default' BULLY is a mistake. Automatic default to a rating, a category, a genre... doesn't matter, is a mistake.  The message, the movie and its social relevance defy that kind of formulaic, conventional thinking. AMC will show this movie, and we invite our guests to engage in the dialogue its relevant message will inevitably provoke.”

Mr. Lopez is one of almost 300,000 people to get behind a petition started by a junior in high school named Katy Butler. Ms. Butler, who has experienced severe bullying herself, started the petition on Change.org after the MPAA ruled by one vote that “Bully” should receive an R rating due to six swear words. When Mr. Lopez asked one of his sons about the film, curious as to whether the debate had reached the demographic the film is geared toward, his son had already signed onto Ms. Butler’s petition.

The support from Hollywood has been on a steady increase since Katy Butler launched her petition. On March 20, Meryl Streep and her daughter Mamie Gummer will co-host a screening of the film with and David Boies, one of the two attorneys responsible for overturning Proposition 8 in California, and his daughter, Mary Boies.  The screening will be held in New York City.

Johnny Depp has also signed on to lend his support; Ellen DeGeneres has devoted time to the film on her television show; and in the sports arena, Drew Brees, quarterback of the New Orleans Saints, has also added his voice to the movement.  Kelly Ripa and Anderson Cooper came on board as news anchor partners, hosting a screening in New York City last week, that was presented by Bing, the search engine from Microsoft. In addition to the screening in NYC, Bing will also be supporting the film in a number of ways, including hosting an additional screening in LA.

Iconic American designer Tommy Hilfiger will design an exclusive t-shirt inspired by the Bully movie poster which will be sold in Tommy Hilfiger stores with a portion of proceeds benefiting Facing History and Ourselves (http://www.facing.org/). Mr. Hilfiger is the first of ten designers that The Weinstein Company will ask to donate their services on behalf of the fundraising effort.  IMG, renowned global sports, fashion and media agency continues to support the film in a number of ways, and famed photographer David LaChapelle has offered to donate his talents towards an advertising campaign.

In Congress, Rep. Mike Honda (D-Calif.) issued a bipartisan letter to the MPAA, supporting Katy Butler’s petition, to urge former Senator Dodd, now Chairman of the MPAA, to overturn the ruling. Over 20 Members of Congress have signed on to the letter. The political engagement continues to grow this week while Congress is in District Work Session, with additional support coming from the Senate. Senator Kirsten Gillibrand (D-NY) called for a PG-13 rating on Twitter today, and has told The Weinstein Company she intends to play a more active role in this protest.

Last Friday, Justin Bieber joined the cause, telling his fans on Twitter about the movie and encouraging them to stand up for each other. He is currently working with The Weinstein Company on how he can do more for the film.

“We’ve got the MPAA’s attention, and with nearly 300,000 signatures and support from celebrities and politicians, there’s now a national movement of people calling on the MPAA to drop the ‘R’ rating for ‘Bully,’” Katy Butler said. “As someone who lived through bullying day in and day out in school, including having my finger broken by bullies, this film is too important to silence with an ‘R’ rating. Everyone should have a chance to see ‘Bully.’”
Posted by Steve Stav at 4:57 PM No comments: