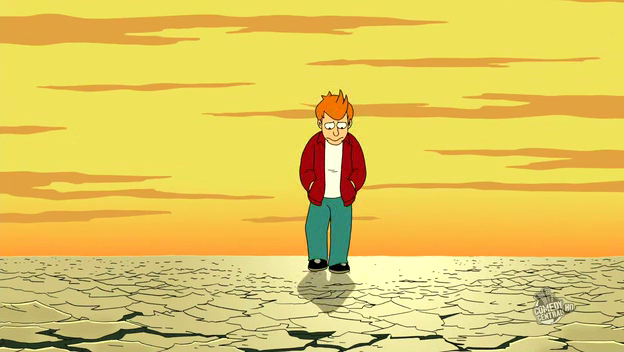 For almost 14 years, I've done my best to keep abreast of the Futurama gang's adventures during an oft-fractured run of seasons; I - and countless others in the Gen-X demographic that seems to be the show's primary target - will miss them terribly.

Groening's careening, alternately pessimistic and hopeful vision of the future - a far cry from Roddenberry's clean, near-utopian Earth - was the perfect vehicle for thought-provoking satire... not just of pop culture, politics and societal status quos, but of humanity, period.  One thing Futurama and Star Trek do have in common is the exploration of human (and alien) natures  — conditions that technology can't evolve or alter.

Every one of Futurama's main characters have at least one glaring weakness to battle, at least one fear to overcome.  I've loved seeing them all shamelessly exploited for laughs... and an occasional tear. There may have not been roses at the end of each episode, but there was always perspective.  It's the sentimental side of Futurama that has always appealed to me the most, a sentimentality tempered with dark humor... an alcoholic robot's skills in the realm of crass levity never went to waste.

All of my favorite episodes, then, contained profound moments of sobriety encapsulated in outrageous plots.  For example, at the conclusion of 2001's "Paradise Lost," a pining, heartbroken Fry feebly attempted to recreate a stellar, sonic drawing of Leela after the alien parasites that made him a superhuman Leela-magnet were expelled.

In the mindblowing H.G. Wells riff, "The Late Philip J. Fry" (2010), Fry stood up Leela again - this time, literally for centuries - as he's trapped in a forward-only time travel expedition with Bender and Farnsworth.  The episode ended with Leela acknowledging their more-than-friendship... as Bender took care of a space-time continuum problem with a shovel.

This year's "Game of Tones" combined hilarious theft of a Close Encounters hallmark with another trip back to the day Fry went into the deep freeze; in the final moments, an indebted Nibbler granted Fry's wish to somehow go back in time and visit his mother in her dreams.

Deep, funny, poignant stuff.  Can't wait to see how (or if) it all wraps up.  Will Fry and Leela finally make something official?  My guess is yes.  And no.

Indeed, there was no certainty in the world of Futurama - except that almost every episode brought with it a cheerful, yet ominous utterance of, "Good news, everyone!"

I think I'll miss that most of all.