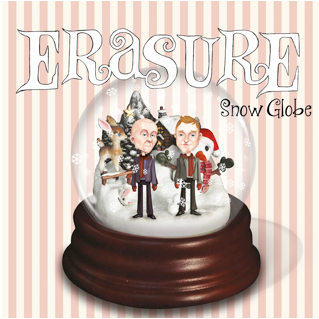 I usually loathe the mention of Christmas before Halloween — but an exception has to be made for Erasure's new Yuletide release, Snow Globe (Mute Records), which hits the shelves on November 11th.

In addition to the standard CD, a limited edition, ultimate holiday gift for the Erasure fan will be issued.  The Deluxe Christmas Box Set includes a desktop calendar, a "tree bauble," postcards, a Christmas card signed by Vince Clarke and Andy Bell, and more.

What, no Erasure snow globe?

Reading the Mute press release, I'd have to imagine that admirers will not be disappointed by the band's approach to a Christmas album — a recording that usually is one of any artist's most lasting legacies... if done right.

"I told Vince I wanted the music to sound like shards of ice or snowflakes falling," Bell recalled in a press statement, which went on to explain that "Clarke paired all the music of songs he worried might be over-familiar back to their route chord and fleshed nothing out, with carefully aggregated synthetic punctuation points, making a spare, brittle noise that speaks of Erasure’s incredible ability to move listeners from the simplest of places."

"'It sounds quite odd,' Clark said, delighted at the leftfield result of what could’ve been such a mainstream pursuit. ‘But always with us melody is at the heart of everything.’"

An extraordinary trailer for Snow Globe — featuring a remarkable interpretation of "Silent Night" — has been created by Martin Meunier (Coraline, James & The Giant Peach), which can be seen here.

The album's first single, Erasure's version of the traditional latin carol "Gaudete," will be released on October 29th.