Peter Murphy's "Tale Of The Tongue;" Should The World Fail To Fall Apart's Anniversary 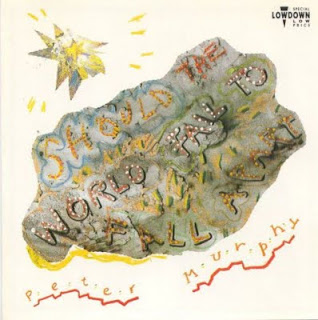 A stellar, yet strangely obscure Peter Murphy track has just been released on CD worldwide for the first time; however, it's just one jewel in a veritable diamond mine.

"Tale of the Tongue," for some reason, was only widely released as a 12" single in 1986.    With a hair-raising vocal performance soaring above a hard-charging sonic maelstrom, one would think, today, that it was one of the Dark Prince's biggest hits.  But alas, no.

Hopefully, it will get much more exposure as it has just been included in Cherry Red Records' anniversary packaging of Murphy's first solo album, Should The World Fail To Fall Apart (Oddly, "Tale" was only included in Polygram Canada's 1986 release, bumping "Canvas Beauty").  Though the album wasn't as popular, in the Peter Murphy catalog, as say, Deep or Love Hysteria, it is an important bridge between the singer's days in Bauhaus, his project with the late Mick Karn (Dalis Car), and later, more mainstream success... if the Goth icon has ever been "mainstream."

Twenty-five years later, Should The World Fail... remains a beautiful record that reflects an artist boldly taking steps in new directions without completely abandoning his past.  Besides a famous cover of Magazine's "The Light Pours Out Of Me" and the live staple, "Final Solution," it contains the aforementioned "Canvas Beauty," which has long been a sentimental favorite of mine.  Though we have never discussed the mystery of "Tale of the Tongue" in our interviews, Murphy did explain "Canvas Beauty" to me back in 2000.

Murphy has just finished a spring-summer tour of the U.S. in support of his new album for Nettwerk, Ninth.