In celebration of the anniversary of Cameron Crowe's masterpiece, Almost Famous, I've taken a 2001 interview with drummer Ben Smith out of the vaults.  Smith, at the time one of Seattle's top hired guns, had played in Ann and Nancy Wilson's Lovemongers prior to getting tapped for the Almost Famous soundtrack.  His thunderous, (dare I say) Bonham-like drums, along with Mike McCready, Peter Frampton, et al., provided the music for the fictitious, bombastic band Stillwater.  Smith followed up this feat with work on the Vanilla Sky soundtrack.

I knew Smith from some of his Jet City gigs, knew his reputation, knew him to be one of the most genuine souls in the business.  What I didn't know — until we sat down at a Ballard sidewalk cafe — is just how deep and fascinating his career had been up to that point.  42 at the time, he had been playing professionally for 27 years.

Of course, Smith's career became even more fascinating shortly after our talk - he's been Heart's drummer ever since.

This article is slightly condensed from the original, which ran in the now-defunct Seattle music magazine, Rock Paper Scissors.


SS: What were your early experiences with Ann and Nancy Wilson like?

Smith: I knew they were great, but I had never listened to the music.  I saw them play a couple of shows when I was playing with another band.  I thought, ‘Wow! That’s cool.’  That was when I started trying to get some work with them - this was about 1995.  We recorded some tunes in Nancy’s basement...we played some shows in Seattle, and then I played about 30 gigs in the summer of ‘95, from the Midwest to the West Coast.  We did some TV gigs that fall - we played the Tonight Show, and the Rupaul Show.

SS: Did Rupaul give you a hard time, try to sit on your lap or anything?

Smith: I just met, um, her.  I was really surprised at what a professional show that was.  The clip from that show is still being played - on VH1’s Behind The Music.  I haven’t seen it, but friends keep telling me they’ve seen me on TV.

SS: I’ve heard that the Wilson sisters have a pretty tight circle.  Were they stand-offish when you began working with them?

Smith: No, they are always really sweet.  Like many professionals, if you’re a musician working with them and they like what you do, they recognize your work and respect you.

Smith: Yeah!  In the studio, we modeled it after Bad Company’s Bad Co. record, which was released in ‘74.  So, we had to go for parts that, in our imaginations, that were something that might have gone down in those days.  The sounds couldn’t be too good, because of the technology that they had back then.  We would do passes that sounded pretty good, but not too good, because Stillwater was an opening band.  It was first passes on almost everything.  I’d listen to them and say, ‘I’ve got to do it again.’  Nancy, Peter Frampton, Mike McCready and some of the other guys would say, ‘Can’t be too good - I think you’re there!’

A classic thing about session recording is that by the time you get to the third or fourth take of a tune, you’re sometimes thinking about it too much and working too hard.  Not often do you go with the very first take, either; on this record — even if it wasn’t exactly right —  we kept it, because we knew it was the right vibe for the movie. 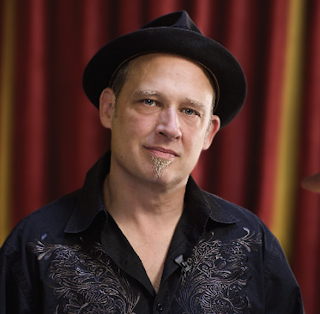 SS: When did you begin drumming?

Smith: I began drumming seriously when I was 14.  I went to Garfield High School...the music teacher there, Clarence Acox, was very inspiring.  He still teaches there.  When I was a little kid, I wanted to be a drummer - I thought I was a drummer.  Then, when I went to Garfield, I said, ‘Oh, I’m not a drummer. I’d better practice.’

SS: You played in the jazz band there?

Smith: They didn’t really have a jazz band then - it was really hard funk.  The Gap Band, Earth, Wind & Fire, Tower of Power - whoever was hot back in the 70s.  By the time I was 15 1/2, I was gigging.  I practiced 3 hours a day the summer I turned 15.  By that fall, I was out playing gigs with a lot of the black horn bands that were working around Seattle at that time - this was probably about 1974.

Smith: Yeah, I was the anomaly - the white boy who could play funky and keep time and not destroy the groove.

SS: The club scene must have been pretty wild back in the ‘70’s.

Smith: In some ways it was.  The greatest thing that I ever saw, as far as craziness goes - was this club called the Jet Inn out by the airport that was run by this guy from Guam.  He booked all kinds of music, but what made the most money were these black bands or mixed-race bands that would draw tons of people - Acapulco Gold, Onyx...anyway, this Guamanian club manager was out of his mind.  There was a lot of drugs around, a lot of people were smoking herb.  One time, I went to work early one night, and saw this guy do this crazy thing - to inspire fear in his staff, he had a busboy lay on two chairs - his feet on one and his head on the other.  He then put a raw potato on this kid’s stomach and broke out this samurai sword, this blade was as sharp as one can be.  He then came down with all his strength and cut this potato in half, without cutting the busboy at all.  Who knows what kind of drugs this guy was on.  He had these little Samoan guys bouncing at the club, these guys could take anybody - I mean anybody - out, just like that.

SS: Things must have been pretty lax around here back then for you to be getting into clubs.

Smith: It was totally lax.  By the time I was 21, I had stopped playing clubs for awhile - I was tired.  I made more money between 15 and 21 than...I was 28 or so before I made that kind of money again.  There was a lot of gigs to be had back then, and the scene was so open.  Then, everything shut down, a lot of clubs closed in the Northwest by the time I was 18 or 19.  A lot of clubs that hired those great black horn bands, they stopped booking them.  It was a weird thing - it was partly due to the economy, partly due to the racism that sprang up.  Black bands from the Northwest traditionally had to go to Canada or Asia or the East Coast to get work, but from about 1972 to 1980, there was all this activity happening here.

SS: How did you talk your parents into letting you do all this?

Smith:As long as I stayed out of trouble, they were fine with it.  The guys in the band picked me up and took me to work.

SS: That must have been a sight to see.  Who were some of your early drum heroes?

Smith: I had two grooves that I listened to when I was fifteen or sixteen.  Hard funk was one of them, so a lot of the funk drummers really knocked me out then, like Bernard Purdy, and also James Gadson, a session drummer who played on a lot of records.  I also liked fusion, so Billy Cobham was really big for me.  I didn’t even think about playing rock until I was 30 or 32.  I moved to New York when I was 24, and played mostly jazz and r&b.

SS: That must have been something, playing r&b in New York in the early ‘80s.

Smith: That was a gas, I loved it.  I was in this weird group of guys there.  Some of the guys that are in the Conan O’Brien and the Saturday Night Live bands are some of the guys that I played with back then.  We’d play these club gigs - some rock, some funk, some r&b.  A lot of those guys are still doing that.  Their TV gig would be over by 6, and then they’d go record or play clubs or weddings.  I’d do a recording during the day and go play a wedding that night with guys that were playing on Steely Dan records or something like that.  There was good money in private parties - better than playing clubs, most of the time.

SS: What was your first movie soundtrack?

Smith: My first soundtrack was probably Smoke Signals.  Sherman Alexie was there for the music recording.

SS: I understand that he’s a very intense fellow.

Smith: I think he’s an intense guy, but he immediately picked up on the essence of working in the recording studio, and he was very sweet about it.  He saw how B.C. Smith and I were working together, and he made comments on things we could try.  Some things worked, and some things didn’t - you try different angles.  He was a great guy about it all.

SS: So are you tight with Cameron Crowe now?

Smith: (Chuckling) We know each other.  I’m honored to know the guy - what an amazing talent.

TOMORROW at Intermittent Signals - My 2000 "Almost Famous" interview with Cameron Crowe.
Posted by Steve Stav at 3:11 AM