Antarctica, As Visualized By Vangelis


One of the most breathtaking films I've ever seen, 1983's Antarctica is a beautiful, sometimes harrowing speculation of what might have happened to a team of sled dogs immediately after they were abandoned in a South Pole storm.  The Japanese film is based on a real incident/adventure that occurred in 1958; the ill-fated expedition also inspired the Disney film, Eight Below — which I refuse to see.  Antarctica's a quiet classic, very spare on dialogue and heavy on first-rate cinematography as it follows the dogs' efforts to survive.

"Quiet classic" may be a misnomer, as the soundtrack by Vangelis is as vivid and tone-setting as the camera work.  I'm not the biggest Vangelis fan, but this is a minor masterpiece — and as integral to this film as his previous work was for Blade Runner.  Chariots of Fire certainly made Vangelis white-hot for awhile; after Antarctica, he scored the hauntingly gorgeous music for the Hopkins-Gibson film, The Bounty.

While the Antarctica soundtrack is readily available on CD, inexplicably the movie has never been released on DVD outside of Japan and Hong Kong.  Hopefully it will make its way west soon. 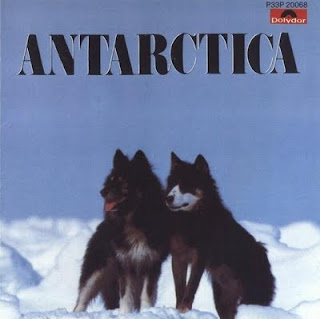