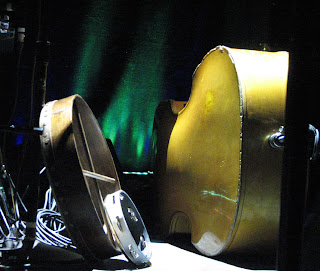 What a wild, strange year for music... and for myself.   I absorbed a lot of the excitement, but not nearly as much as I should have; various personal crises and odd situations conspired to restrict my aural input and writing output.  As the last days of December wind down, my limited, yet memorable exposures ironically serve to help me avoid making any "Top 10" lists that I'm not qualified to write, anyway.

Instead, I've chosen to slap together some personal highlights in the realms of writing and photography.  If you're thinking this might akin to those ego-driven, year-end Christmas card-newsletters from friends whose lives seem much more exciting than yours... it's not.  Trust me, though I've been at some of the right places at the right times, you've had more thrills over the past twelve months than I've had.  You might even have better pictures to prove it.

I guess I should begin close to home... my acquaintance with singer-songwriter Michael Dean Damron has reached the point where I can no longer professionally critique his work, but ethics do not prohibit me from chronicling his profound comments and wild adventures.  Portland's favorite hillbilly released his annual offering of raw Americana, Plea From a Ghost, in the spring, and spent much of the rest of the year promoting it on the road... in between appointments with ink artists and whiskey bottles.  Seriously, though, Mike D proved once again that hard work and honest lyrics often earn a lasting place in people's hearts. 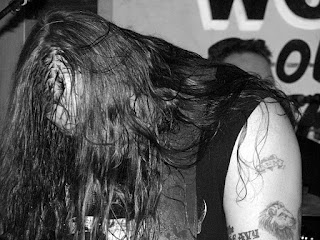 Speaking of hearts, who in Seattle doesn't love Nick and Heather Millward, the town's First Couple of rock?  Few keep it as real as the Millwards and their long-running outfit, the Riffbrokers.   This year's Every Pilot's Blinded By The Sun was the album that fans and fan-friends have been waiting for.  Their Rubber Soul is still on the horizon, but this disc proved without a doubt that Nick — one of the Northwest's finest songwriters — has even more greatness lurking in his noggin than I had imagined.  The Riffbrokers were, once again, seemingly omnipresent in area clubs this year; I hope the band makes a return to roads beyond in 2012.  Genuine and rollicking and thought-provoking in all the right places, The Riffbrokers are what rock 'n' roll is all about, Charlie Brown. 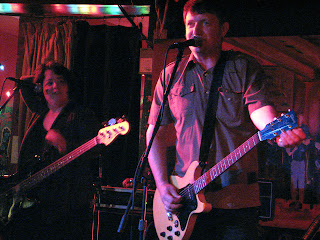 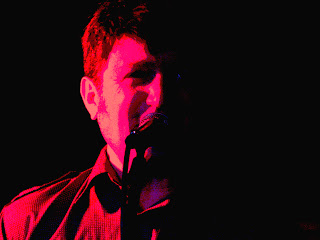 Blancmange didn't stick around as long as say, Depeche Mode, but there was a time during the 80s that the influential duo stood shoulder-to-shoulder with DM, Heaven 17, Yazoo, Soft Cell and every other synth-pop giant of the era.  Last spring, Neil Arthur and Stephen Luscombe released their first album in 25 years, Blanc Burn.  I talked to Arthur in May, a real treat for myself — as I still have their hits on my record shelf and on my computer.  Arthur was as warm, honest and interesting as I could have hoped for.  Unfortunately, a serious illness prevented Luscombe from performing at some UK reunion shows; hopefully, the band will make it to the States in 2012, with a recuperated Luscombe at center stage.

I wish I had taken this picture, but alas, I've never been to England. 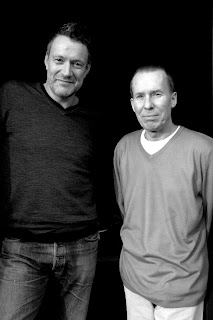 Synthesizers and 80s-influenced music seemed to be a recurring theme in 2011, both on the alternative charts and in my choice of interviews.  I rang up pioneer Thomas Dolby at his seaside home twice this year, in May and again in September .  The subject?  His first album in twenty years, A Map Of The Floating City — and an accompanying, interactive online game.   Interviewing Thomas Dolby is a fantastic experience; extraordinarily fascinating and expectedly intelligent man.  And funny. 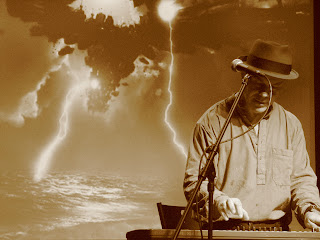 I then caught up with Dolby in October at the Triple Door, where he was making a stop on a solo performance/lecture tour.  The next day, at Redmond's PlayNetwork studios, I shook hands with one of my idols.  Dolby will be touring the States with a band in 2012. 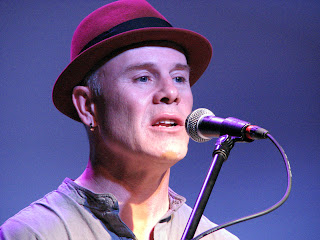 2011 was another banner year for women in rock.  What an understatement.  I could tie a noose for missing Lykke Li at the Showbox, but catching Telecaster-slinging chanteuse Anna Calvi at the Crocodile on the first day of June almost made up for it.  Occupying an ethereal aural otherworld somewhere between Siouxsie Sioux and Maurice Ravel, Calvi put on a show that I'll never forget.  Her critically acclaimed debut album saw limited airplay Stateside — and she didn't tour much here.  However, this was offset by numerous big gigs in the UK and Europe, where she's made a lot of year-end lists. 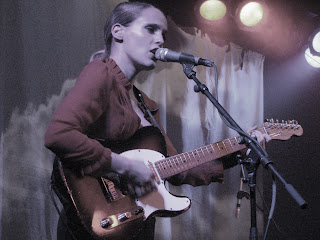 Somehow, Imelda May topped herself in 2011... and I was again front and center.  Waiting at the cozy Neptune Theater's stage for two hours in August — for my ten minutes' worth of photography — was worth it, and then some.   After taking my pictures, I usually bug out to the back of the room for a drink - but this time, standing about five feet away from heaven made me forget my aching feet.

Boys want to take Imelda May to a prom; girls want to go clothes shopping with her.  Anyone who's witnessed a show by this roots music-channeling, girl-next-door-turned-pinup-dream wishes this Irish siren could tuck them in at night with a lullaby.  U2's Bono capped Ms. May's year - or perhaps it was the other way around — by joining her on a Dublin stage in December. 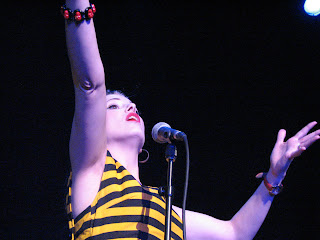 In July, Carrie Akre said goodbye to Seattle, moving to Minneapolis.  Still unbelievable.  The former Hammerbox and Goodness frontwoman has been a sister, a mentor, an influence for so many.  It seemed that everyone in town was either on the stage or in the crowd for a Crocodile sendoff concert.  The night was perfect, if farewells can be characterized as such.  An equal mix of tears - including beautiful Rachel Flotard choking up at the microphone— 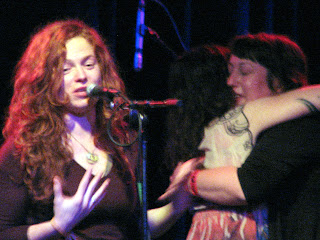 — and smiles and laughter.  This photo of Seatown rhythm-section demigods Chris and Rick Friel is one of my favorites of the year. 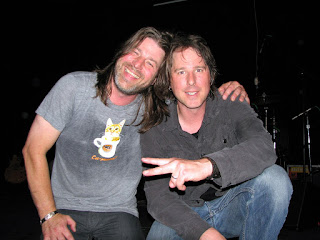 Jesse Tabish not only gave Robin Pecknold a run for his money in 2011's "Best Bearded Countenance" competition, his band — Oklahoma's Other Lives — rivaled the vaunted Fleet Foxes in the "alternative folk" genre this year.  Frequently likened to Seattle's darlings by critics, Other Lives actually have little in common with the Foxes, other than the capacity to make astounding music.  Other Lives' sophomore disc, Tamer Animals, proved to be not only one of my most listened-to records of 2011, but one of my favorite albums of the last ten years, as well. 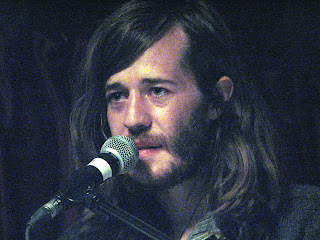 After interviewing Tabish for a feature, I spent two nights in July watching, photographing and chatting with this oh-so-talented, yet genuinely well-grounded group.  Cramming everything from a cello and xylophone to antler bells and keyboards on stage, they played clubs in Seattle and Bellingham; it was like hearing a symphony in a garage.  Other Lives toured incessantly this past year, zig-zagging across America, plus the UK and Europe — garnering praise wherever they performed.  The quintet is resting comfortably at home now, but they'll be back on the road soon, opening for Radiohead. 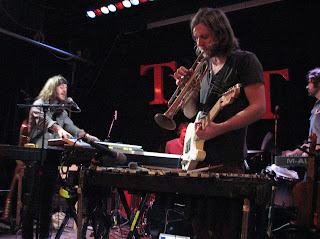 I went to a picnic this summer, and wound up at a power-pop extravaganza.  Shortly after arriving at a nearby private party/overnight campout, I stumbled into Kurt Bloch, Seattle music's reigning godfather.  Which wouldn't have been unusual, except for the fact that we were 30 miles from Bloch's domain, in the middle of a farm.  The reason?  The freakin' Fastbacks were playing a show on the sly.   The immortal band had just reunited, out of the blue, for a couple of gigs the previous weekend - and decided to keep the good times rolling.  You haven't lived until you've seen the Fastbacks blow out a converted garage... Bloch's on-the-fritz mic only added more authenticity to the fracas.

The only thing is, I had forgotten my camera.

The Psychedelic Furs seemed to have made a pact with the devil sometime in the past few years.  Impossibly, yet certainly, they have never sounded better onstage than they did in 2011.  I managed to bump into these icons three times this year, beginning with a May interview with bassist Tim Butler, whose youthful enthusiasm is equaled only by a great sense of humor.  Later that month, after a mindblowing Furs gig at the Showbox, I ran into legendary saxophonist Mars Williams on the sidewalk...and forgot to chat him up about The Waitresses. 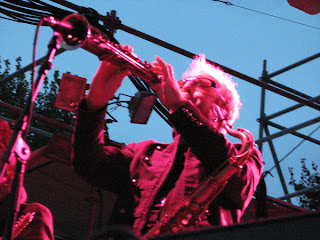 The Furs also played the Redhook Brewery's 30th Anniversary bash in September.  While they were in top form - and openers Tom Tom Club were even more fun than I'd imagined them to be — the night belonged to Devo.  In the midst of a rainstorm, my age-defying heroes performed as if their first record contract depended on it.  One of the best, most entertaining concerts of my lifetime. 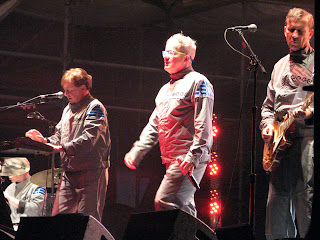 My music-journalism year was capped by another dose of the Dark Prince.  Peter Murphy returned to Seattle in December, supporting his glam/raw-power Ninth album; unfortunately, it wasn't the best of nights.  Minor technical issues and a could-be-tighter band slightly marred the show, seemingly — to the diehards who paid attention — throwing Mr. Murphy off a quarter-step.  Nonetheless, catching the icon on an "off night" is infinitely more enjoyable than listening to most of those he's influenced on their best evenings. 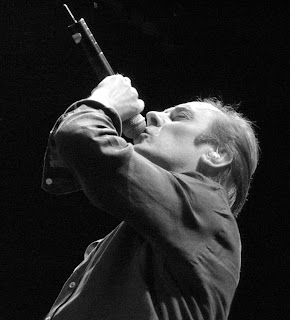 Happy New Year, and may the coming months bring you close to the music you hold dear.