From Austin to Austin 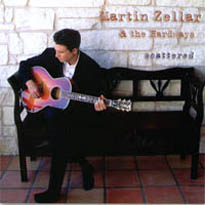 
By Steve Stav, for Ballard News Tribune, Seattle, Sept. 2002.
Singer-songwriter Martin Zellar lives in Austin these days, but his heart remains in Minneapolis. Zellar enjoys a sort of icon status there; in the late '80s and early '90s, his Twin Cities-based band, the Gear Daddies, developed a huge following that still exists today. Following a brief ride on the fame roller coaster (which included their hit "Zamboni" appearing in the films "Mystery, Alaska" and "The Mighty Ducks"), the Daddies dissolved, with Zellar continuing on with a backing group, the Hardways (Dan Neale - guitar, Scott Wenum - drums, childhood friend and Daddies bandmate Nick Ciola - bass).
Zellar and the Hardways frequently play in Minneapolis, the Northernmost city of a circuit that begins in the Lone Star State. The singer also occasionally haunts Minneapolis and the midwest with his wildly popular Neil Diamond tribute act, Neil!
Zellar's addictive new album, "Scattered" (OwenLee Records), demonstrates his ability to capture a working-class everyman's bouts with loneliness, longing and self doubt -- and often resolves them with renewed determination or optimism.
"Scattered" is essentially an Americana record, with dollops of honky-tonk and Minneapolis barband brushed on in spots. It's also a handful of musical snapshots of Zellar's life -- which began in the dreary, small, meat-packing town of Austin, Minn.
SS: You play music, you have a wife and two kids, and you don't have a day job. What is there to be depressed about?

Zellar: I think part of it is just genetic -- I was a melancholy child, to put it mildly. And, the way I grew up wasn't exactly the "Cleavers." My dad was in the hospital pretty much non-stop from the time I was in nursery school, and subsequently didn't have a lot of money.
The other part of it is that I don't sleep well, and I tend to write in the middle of the night when no one else is around -- you tend to get introspective at night. But I don't think my song writing is indicative of my overall personality.
SS: Scattered is your first album in four years. What were you doing in the meantime?
Zellar: I've been playing a lot, but a lot of it is laziness. I'm not a big fan of the studio ... I tend to put it off. I had written a lot of songs; when we went in (to the studio), we recorded two CD's worth of stuff ... the songs that ended up on "Scattered" was definitely the more introspective of the bunch. They seemed to fit together, thematically.
SS: Did you go to Minneapolis to be a musician, or to just get the hell out of Austin?

Zellar: I went to Minneapolis just to get out of Austin, period. Music was certainly something I dreamed of, but I didn't think of it as a possibility
Growing up in Austin, you just didn't think that that kind of thing is a possibility. I listened to a lot of music as a kid... I just didn't dream that it would become a reality for me.
SS: Was the Replacements' success an, influential or motivating factor for you?
Zellar: Yeah, definitely ... in more ways than one. I saw them play — I thought, 'Wow! This is a band that does what they do and saying, 'Take it or leave it.'" To be brutally truthful, the only reason the Gear Daddies ever got signed was that there was so much attention focused on Minneapolis at the time. Seattle certainly went through the same thing. At the time that we got signed, there was the Replacements, Husker Du, Prince, Soul Asylum... it was such a hot spot, labels were sending A & R men to Minneapolis and saying, "Sign a Minneapolis band."
We were at the proverbial right place at the right time ... there was no reason for us to be signed to Polygram, we weren't a major-label band. We just didn't fit into the system, and that became apparent almost right away. I don't regret it -- we toured, we got on Letterman, we got some cool equipment; but, at a certain point, it seemed like we were running in place.
SS: Music is a very curious business these days.
Zellar: (laughing) You said a lot there, man.
SS: I meet so many artists who had some big-label success at one time, but musically, are much better now. And, as far as Americana or whatever goes, you have Ryan Adams getting a ton of airplay, while there's a million guys out there playing club circuits that can blow him away.

Zellar: I started out on the smallest label you could find, in Minneapolis; then we got signed to this behemoth -- Polygram; then went to Rykodisc -- which is, depending on how you look at it, either a small major or a really big Indie; and now I put out CDs on my own. So, I've been at every level in this business. What I haven't been is "huge."
People that I know who have been through that -- like Soul Asylum -- I feel terrible for them. It's the ultimate double-edged sword. You get up there, and then where do you go? The number of bands that reach that level is tiny, and then the amount of bands who manage to stay up there is almost non-existent.
SS: Was your move to Austin a business decision?

Zellar: No, definitely not. My wife and I were both raised in Austin, Minn. We had just reached a point in our lives ... the winters were just beating me down. Not only the cold, but those January-February days when the sun just doesn't come out.
Over the years, I'd been through Austin, Texas a bunch of times, and it seemed to stick out from the other cities we stopped at on tour. My wife and I went down there once and found a house that we loved, and put a bid on it -- our move was impetuous, to put it mildly.
SS: At what point did you reconcile the "Cracklin' Rose" Neil Diamond with the sell-out, "Love On The Rocks" Neil Diamond?

Zellar: (Laughs) I don't. My love of Neil Diamond includes recognizing that it's pretty funny, too. The whole thing started out as a joke, period. Way back when, Soul Asylum was playing a gig, and we thought it would be really fun opening for them doing this Neil Diamond thing.
We fully expected to be objects of scorn, that it would be like some Andy Kaufman routine where people would just hate our guts. But they loved it..,. we did it a few more times, and then it took on a life of its own. Now, it keeps us busier, and everyone can pay their mortgages a little easier because of the extra gigs.
It works because it's funny at the same time -- there's some great pop music, but there's a sense of humor as well. I've seen Springsteen tributes, and they don't work as well, because they're too serious about it. At our shows, there's huge Neil Diamond fans, and then there's people who are laughing hysterically; it works at both levels.
Martin Zellar and the Hardaways • Scattered • 2002 • Owen Lee Recordings