Will play for food (drive) 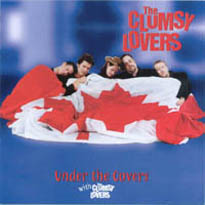 • Vancouver, B.C. favorites get audiences into the spirit of the holiday season with an exchange food-for-CDs drive.


By Steve Stav, for the Ballard News-Tribune, Seattle, 2002.
Vancouver B.C. "Celtic bluegrass" sensations the Clumsy Lovers are making holiday donations of the most altruistic kind. Not only have they recorded some great Christmas music, but the band is giving it away at their concerts. Well, not giving it away, technically; they're trading the discs for food or money in order to feed hungry families.
"In the jam-band scene that we sometimes get associated with, they support a lot of food drives and environmental issues and so forth — especially at Christmas time," said the Lovers' ace fiddler, Andrea Lewis, from a Kinko's in Boulder, Colo. — where the road-weary group was printing more concert flyers. "But it doesn't always seem that the bands themselves are giving something of themselves, other than pushing these organizations. We couldn't afford to play a month of free shows, but Chris (Jonat, the Lovers' leader, bassist and idea-man) thought that we could cover the cost of going into the studio and putting out a two-song CD."
A Very Clumsy Christmas features two numbers destined to be perennial favorites. The first is a stunning version of Robbie Robertson's "Christmas Must Be Tonight," reworked in Clumsy Lovers-by-way-of-the-Pogues style -- followed by "Snoopy's Christmas," a bluegrass-fueled mish-mash of Peanuts tunes, including "Snoopy vs. the Red Baron."
"We're pretty happy with [the CD], we went into the studio and banged that out in half a day," Lewis half-hoarse from a nasty cold, commented nonchalantly. "We had a friend [Amy Stephen] come in and play accordion and tin whistle. We had talked beforehand about what we wanted to do, it was pretty relaxed -- no pressure."
The Lovers' amazing Christmas offering caps a triumphant year for the quintet, which also includes drummer Devin Rice, vocalist-guitarist Trevor Rogers, and recent-recruit Jason Homey, an award-winning banjo picker who has enhanced the group's bluegrass leanings.
The band has spent much of the last 12 months on the road supporting a stellar album of cover tunes that have been gig staples and fan favorites. Under The Covers With The Clumsy Lovers reflects the group's quirky, frenetic formula that has made them one of the Northwest's most popular live performers -- the top-notch musicians wander all over the pop-music map, re-inventing everything from Paul Simon's "That Was Your Mother" to Lynyrd Skynryd's "Sweet Home Alabama," to two Beatles songs, two Pogues numbers, and even the J. Geils Band's "Centerfold." Even the CDs cover is a clever take on nostalgia -- the band was photographed sleeping under the Canadian flag, in homage to the Who's The Kids Are Alright album. Lewis, a classically-trained violinist who wasn't previously familiar with the Who's classic cover art, remembers the photo shoot well.
"Flags are expensive -- that flag was $500, but you could rent it for $75," she said. "When we rented it, the lady at the shop asked what we were using it for. She said that that was fine, but that we couldn't take it outside. We said OK, but of course, the photo shoot was outside. We were very paranoid about not getting our shoes on the flag or anything. We carefully folded it up and Chris took it back...The lady began inspecting the flag, she opened it up and there were three pieces of grass in the folds!
"At that point, Chris was sure that we had a $500 flag, but she let it go," Lewis, the group's most attention-getting member, added.
At press time, the Clumsy Lovers had just concluded a nine-week tour that took them from their B.C. stomping grounds, through the West and Southwest, to the East Coast for their first-ever New York City performances, in which the band was enthusiastically received. The do-it-yourself dynamos will be taking five days off for Christmas before a playing a big New Year's Eve show.
The band will be back in the studio in January, starting work on a much-anticipated new collection of original songs that Lewis described as "taking five times more money and time" to make as their previous records. For the time being, though, the Lovers are thoroughly enjoying performing during this holiday season.
"People have been really receptive," Lewis enthused. "In Boise, for example, people donated about 250 pounds of food and something like $225. We went through over 150 CDs there.
"We're having a lot of fun," she added, "I don't think we've ever played Christmas music before."
The Clumsy Lovers • Under the Covers • 2002 • Clumsy Lover Records