The shit from Shinola 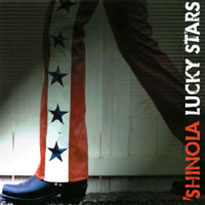 
By Steve Stav, for Backfire magazine, Seattle, 2002.
When it comes to making music, there are basically two types of artists --those who record their compositions and then wait and see if a critic or label exec "discovers" them, and those who record and then venture out to make things happen, or die (or, at least, go broke) trying.
Seattle-based Shinola, a band steeped in the performing precedents set by Springsteen and Petty's Heartbreakers, are artists of the latter variety. While their recording career hasn't been consistent (their first full-length, the '80s-bar-band-echoing Lucky Stars, was released in December) Shinola, by means of sheer persistence, has achieved some enviable feats over the past couple of years -- including playing the Gorge Ampitheatre's second stage twice and climbing their way to the top rung of a Lucky Strike-sponsored "Battle of the Bands" series.
Formed more than four years ago by whip-smart, half-Canadian, quasi-rednecked brothers T.J. and Kyle Martin, Shinola eventually recruited punk-rock bassist Kevin McGregor, an Arizona native and former semi-pro footballer with the delightfully lazy demeanor of a Carolina hillbilly. More recently, Mike Nelson, who has played in a number of Seattle bands over the last 15 years, has replaced their old friend Michael Bailey on drums.
Widely respected in Seatown's music community for their integrity and kindness, Shinola is also known for its sense of humor. Their banter is peppered with a seemingly continuous patter of put-downs -- the fine art of the insult seems to be an integral part of their communication with one another. And given this band's intellectually schizophrenic makeup, a typical conversation with them can cover topics such as politics, economics, samurai philosophy, deer season do's and don'ts, and the religion of NASCAR. However, as Classic VHI's forgotten videos flickered in the background, I steered the quartet towards the equally-fascinating realm of rock 'n' roll.
SS: You're always 'workin' it, hustling for gigs and so on -- when didyou start being so aggressive, business-wise?

TJ: After El Camino (the band's second EP), we very quickly came to realize that we weren't going to get any more people to our shows, we weren't going to get any better shows ... nobody walks into the Crocodile on a Thursday night and says, 'These guys are awesome, I'm going to make them famous!' We figured that if we wanted to get further along, if we wanted more than 50 to 100 people coming to our shows, we had to do it ourselves. There was no managers, no publicity agents, no booking agents that were doing anything for bands that didn't already have something going on. We learned everything by trial-and-error.
Mike: It's a basic attitude that you have to have ... we're the ones that have the most at stake. Either you go out and work and bust your 'nads, or you sit around and wait for someone to do it for you.
Kyle: The biggest thing that happened to Shinola -- as far as getting shows, making records and so on -- is getting a solid line-up. You can't go on the road until you get people that want to get in the van and do it -- and consistently do it.
T.J.: This is the first time we put out a CD where all of the same band members recorded the album, played the CD ielease party, and worked on everything that happens from there.
SS: This new album has got a great 'live' sound. How did you avoid going overboard with production?

Kyle: What's funny about Lucky Stars is that we captured what Shinola really is about -- we did these intense recording sessions; we didn't string it out. From recording and mixing to mastering and pressing, it took about four and a half weeks -- Bam! just like that, we had a CD in our hands. [Avast Studios engineer] Kevin Suggs has worked with us before, and he knew just what we wanted.
[Joan Jett's "Bad Reputation" video appears on the TV]
Kyle: Joan Jett is totally cool.
Kevin: You won't see a girl like Joan Jett in Seattle.
SS: The thing I miss about the old days in Seattle is the grittiness -- the new money that came in washed everybody that looked like Joan Jett out of downtown.

Kyle: I was down by Pacific Place the other day, and I thought, "I am so underdressed here."
T.J.: Keep in mind, Kyle was wearing his John Deere hat.
Kyle: But the point is, everyone downtown seems to shop at Eddie Bauer --they're all dressed alike. It didn't used to be that way.
Mike: Unless you're a yuppie, you can't afford to live downtown.
SS: Who thought of the name 'Shinola'?

T.J.: I thought of the name. We had been going by the name of 'Shiner' before Gator Meat [their debut EP] came out. But there was a band out of Kansas City called 'Shiner' that was getting a lot of press and attention. We were talking to local booking agents that were asking if we were the Shiner from Kansas City, in our own hometown! So we decided that things had to change before we put the CD out.
SS: Did you take it from that old expression 'You don't know shit from...' or from the shoe polish company?
Kyle: Well, that's where 'You don't know shit from shinola' comes from... it was an expression that our dad used to say to us all of the time. We later found out that it referred to shoe polish!
T.J.: We went down to the UW School of Engineering, where you look up patents and such, and we looked up different names. I thought of 'Shinola,' and found out that no one had the copyright on the name to sell recorded material. An interesting little fact: we later had to have a lawyer send a note down to a band in Nashville going by 'Shinola'-Dolly Parton's nephew was in the group, and she actually sang on their CD.
SS: In retrospect, what was the best thing about your Lucky Strike odyssey?

(The band, simultaneously): Our van and trailer.
Kyle: We had a broken down old van, and we were thinking of how we were going to get a new van. All of the sudden, boom! Lucky Strike comes along and gives us money to travel -- supposedly money to fly and to rent gear with -- and instead we boughl a van and trailer.
T.J.: Thank you, Big Tobacco! Lucky Strike has a bold, yet smooth flavor!
SS: But none of you smoke...

T.J.: Well, yeah... the other great thing about that deal was getting to play the House of Blues on Sunset Strip and the Great American Music Hall in San Francisco. We played with a great band out of LA called Sunchild. But the best thing about that whole experience was, after it was all over, we still had that van and trailer.
SS: Kevin, what's your New Year's resolution? To quit drinking?

Kevin: [Reclining and seemingly half asleep, McGregor is nearly incapacitated by a bad cold] Nah, I really don't drink much. I guess it would be to get back into "football shape."
Kyle: You say you don't drink much, yet there's a glass of whiskey in your hand.
What is the band's New Year's resolution?
T.J.: We're gonna play a shitload of shows.
SS: Given this country's suddenly patriotic fervor, and in lieu of another Springsteen 'Born In The U.S.A.' tour, I take it that you're taking your encapsulated 'arena rock' act on the road?

T.J.: [laughing] We're an 'arena-rock' pellet.
Kyle: [laughing] Just add 'arena,' and you've got your 'arena rock.'
SS: But would it be fair to say the U.S. needs rock, and you're there to give it to 'em?
T.J.: Well, there's always been rock bands out there, and people into it. But what's happened is that a lot of people have gotten into other types of music, a lot of fluffy stuff you hear on the Top 40. But the wheel goes around, and rock is coming back.
SS: Music is generally considered a 'liberal' medium...

Kyle: Don't tell Ted Nugent that.
SS: So I find it odd that so many musicians have jumped on the patriotic bandwagon, a lot of them who, in any other time of military action, would be protesting in the media.

Kyle: I'd like to get something right out on the table -- when September 11 happened, we were right in the middle of recording Lucky Stars. The concept of the album cover -- the stars-and-striped pants [Nelson's Evel Knievel leather trousers], the colors -- that was done before that happened. Actually, we had a meeting about the cover a long time ago -- we decided that we were tired of people bagging on America, that it's time to bring rock, and being proud to be American, back in style. It's so unfortunate that it took such a terrible thing like September 11 to wake up some people, to make them realize that America is an incredible country to live in, that they're lucky to be here.
Shinola • Lucky Stars • 2001 • Tough Rubber Nut Records