Back to the future with Little Bill 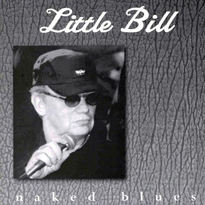 • During his 44 year career in music, Northwest rock pioneer Bill Engelhart has constantly reinvented himself.