A history lesson from Dave Alvin 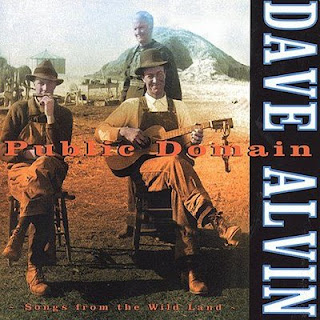 
After his well-publicized, slightly acrimonious split with his older brother Phil and their fiery, influential rock band the Blasters in the mid' 80s, Dave Alvin became one of Oakland, Calif.-based Hightone Records' brightest and most respected stars.
Twenty years spent sharpening the cutting edge of roots music has culminated in "Public Domain," an effort worthy of a Grammy nomination. With this latest venture, Alvin explores his own musical roots, unearthing mostly forgotten treasures from America's rich blues, folk and country landscapes. Alvin and his ace backup band, the Guilty Men, have polished these reworked jewels into a lustrous, fantastic shine that will mesmerize even those indifferent to "heritage music."
I recently spoke to Alvin via telephone as he was preparing for a two-night stand in New York City. Though he was still a little groggy from the night before, the singer-songwriter still managed to be humorous, candid, and, ultimately, profound in relating his thoughts and observations on the music that he cherishes so dearly.
SS: You've gone a long way to make this kind of music, um, 'accessible'...

Alvin: That's not a bad word.
SS: I imagine that there were some challenges in making some of this material swing without going too far afield from the songs' original feel.

Alvin: There was a little tightrope-walking, but not too much, really. Most of these songs are things that I play around the house, so once we got into the studio I knew what I wanted them to sound like.
The hardest part of the record was "whittling down" to what we wound up with. "What Did The Deep Sea Say" has always been my favorite drinking song. It was an elimination process with my favorite public domain songs -- which ones would be the most effective to make certain points about America's folk music and so on.
For example, "Walk Right In." I had in mind to do a couple of other numbers, sort of hokum blues songs. But I finally decided on that one ... I figured that it would be good to do a song that everybody takes for granted as a cornball song -- it's had all of its dignity stripped away from it, all of its danger and ambiguity and wildness has been taken out of it. "Walk Right In" and "Shenandoah" have been taken out of the folk music morgue, have had all of the blood drained out of them. "Walk Right In" started out as a Saturday-night, too-much-to-drink kind of a song, and it became a campfire, Mitch Miller-type singalong. So I decided that, instead of doing another obscure jump blues song, let's take a song that everybody knows, but doesn't think of in its original form.
With "Shenandoah," I think we managed to make it a new song again - it's been done by everyone, even the Mormon Tabernacle Choir. But the lyrics are amazing -- they're spare and simple and they tell eight million stories -- every person's going to get a different story when they hear that song. There's a bittersweet, American paradox that the song captures - the longing for home, and the longing for the new frontier at the same time. Maybe the reason why that you're heading for the frontier is that you can't go back home, who knows? I'm pretty proud of our version.
"Don't Let Your Deal Go Down" is predominantly a bluegrass song, but I decided to take it over to Chicago and do a Muddy Waters version of it. We have a tendency to over-label everything, even the musicians do it. There's such a vast reservoir of indigenous music here... but people act like there's no relation between, say, blues and bluegrass music, and there
certainly is.
Society might have been segregated -- might be still segregated -- but the music never was, which is one of the points I was trying to make.
SS: Since some of these songs go way back with you, could you tell me a little bit about your childhood, and how you and Phil first got started in music?

Alvin: Well, I grew up in Downey, Calif., in the far southeast side of L.A. county. It was a melting-pot area, some farm towns that were being urbanized... When I was a kid, it was still about half rural, agricultural based... you wouldn't recognize it now. There was a lot music there, if you looked for it. We were fortunate that we had these older cousins that were pretty hip, musically. I had this cousin Donna, that was a hardcore R&B gal - she was into Ray Charles and Big Joe Turner and stuff like that. And she'd give us her old records when she was done with them. I had this cousin, J.J., that lived on a ranch, he was into Buck Owens and music like that. And we Mike. who played banjo and guitar, he was into Sonny Terry and Brownie McGhee and Ramblin' Jack Elliott. When we'd have the family gatherings, he and J.J. would bring their guitars - we were just little kids - and these older cousins would play and put each other's music down, but it was all the same stuff to Phil and me.
Then, my dad was a union organizer for the United Steel Workers of America, so his record collection was everything from union songs to the Almanac Singers to... he was Polish, so he had lots of polka records. I was about 12 when Phil and I started to collect 78s and 45s from junk stores, old warehouses, places like that. We started sneaking into bars when I was about 13. For a four to five year period, we were out three to four nights a week. Our parents were very "understanding." We literally, I mean literally, followed people around, at their heels - guys like Lightnin' Hopkins, T-Bone Walker, Big Joe Turner, people like that. So we learned right from the source.
SS: Who taught you to play guitar?

Alvin: Nobody... totally self-taught. [Laughs] It's been a hindrance, but I'm trying the best I can. My brother is a great 3-4 finger-style, finger-picking guitarist, always has been and I would watch him. And there were guys in the neighborhood.
This one guy, Gary Massey, could only do two things on guitar, but he did them great. He could play like T-Bone Walker and Jimmy Reed, and that was it. I'd watch neighborhood guys, we always had guitars in the house, and they'd come over and play. After they'd left, I'd try to do those fingerings and so on.
SS: Apart from a Blasters reunion, are you and Phil ever going to work together again?

Alvin: Probably not, no. We do some things... a couple of years ago, my band and I were playing in Long Beach, and the encore wound up being a Blasters reunion, because out of the blue, everyone was at the gig. That kind of thing's fun, but as far as rehearsing, making a record, making decisions together, that ain't gonna happen (laughs). The Blasters grew up together, we're still "neighborhood guys" to each other, and Phil and I are brothers, and you can't change that though we've tried on occasion (laughs). We're all still close, we're still the same old guys, it's just that the Blasters stopped being fun... that's really the bottom line. Without sounding too one-dimensional, to make this kind of music work, it's got to be fun. The audience has got to feel that vibe coming off the stage. it can be serious, angry, thought-provoking, whatever, but it's also got to be fun. Phil's got a band called the Blasters, but it isn't the same band.
SS: That's sort of like the Beach Boys without Brian, Dennis and Carl...

Alvin: Yeah, I wish he would call it the Phil Alvin Band, or even the Mike Love Band (laughs). If you missed seeing us all play in the '80s, you missed a great live band, I think... apart from our first album, which we recorded in a garage [1980's "American Music"], very little of the original Blasters' records are available, and they probably won't be reissued until we die.
SS: But you never know ...

Alvin: Oh, but I know. There's so much legalese involved, it will never happen.
SS: How is the tour coming along?

Alvin: Things keep getting better every year. Playing live is my biggest thrill in the world, but the actual touring side of it checking in and out of cheap hotels, loading and unloading your gear, that kind of thing's getting really old. On the other hand, the gigs keep getting better ... I feel very fortunate.
When we started the Blasters, our whole goal was to quit our day jobs and play what we wanted to play. I was very fortunate to be able to quit my day job 20 years ago, and I haven't gone back. Even in the worst conditions... recently, we did this gig in northern Alabama, and it was hotter than hell, and raining, and we were playing an outdoor gig. It was just a mess, everything about it was screwed up -- muddy, filthy, humid, everything that could have gone wrong did. Even under those miserable conditions, it sure beats the alternative.
There is a famous quote -- this may or may not be true - but Willie Nelson was playing these dives in the old days, and one night his drummer asked him, "Willie, how long are we going to keep playing these dives?" And he said, "Hopefully, for the rest of our lives." That is very true for me.