What A Long, Strange Trip It's Been 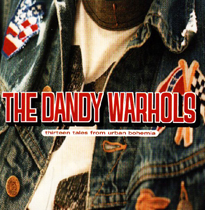 • Courtney Taylor talks about life — and love — on the road as the Dandy Warhols finish their 2000 World Tour.