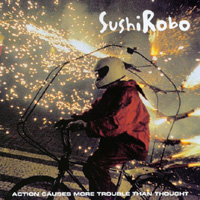 • Talking rock ‘n roll, fish and the Fastbacks with SushiRobo