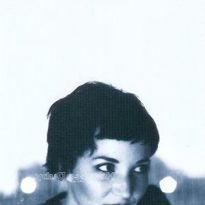 
By Steve Stav, for the Ballard News-Tribune, Seattle, 2000.
To put it quite simply, Heather Duby has a beautiful voice. Frequently compared to Everything But The Girl's Tracey Thorn, the 26-year-old chanteuse's delivery is at once delicate and powerful. Haunting and seductive, it soars and dips, enveloping the listener in a strangely warm haze.
Last year, esteemed producer Steve Fisk put her voice in front of Massive Attack/Pet Shop Boys-style electronica -- and the collaborative result, Post To Wire, was lauded by many critics as one of the best Northwest CDs of 1999.
One might surmise that Duby might have affected an aloof, Eurochic attitude to match the sophistication of her moody songwriting, but, in fact, she's remarkably well-grounded. In spite of her soaring career, Duby comes across as the girl-next-door -- a girl-next-door that could very well be an international star by this time next year.
SS: You came to Seattle from Portland when you were 20. What were you doing the first couple of years you were here?

Duby: I was a barista, I had various coffee jobs and played solo-acoustic gigs with my guitar, working on my songwriting and arrangements. I played at the Colourbox and other small places. Then I formed a band, Clementine (which included Reggie Watts, now Maktub's frontman) and started playing bigger venues, like the Crocodile.
SS: Were you involved in music growing up?

Duby: Yes, I played a lot of piano at home. I sang a lot, I was into choir and theater and dance.
SS: Did you fit in well in high school? Were you a moody kid?

Duby: Moody? [laughs]. Probably. In school, I couldn't really identify what sect I came from, because I managed to get along with everybody. It was really strange... I didn't really enjoy high school, if that's what you're asking. It was probably the worst four years of my life.
SS: Back then, did you listen to the 4AD ['80s mood/gothic/ambient label] stuff that you're compared to now?

Duby: Uh-huh, I listened to a lot of the Cocteau Twins, and lots of different things. I was a big Erasure fan when I was younger, and I got into punk, kind of sporadically -- Pegboy, the Dead Kennedys. I listened to the Pixies, New Order, the Cure, the usual stuff. I'd go to shows, see the Dead Milkmen and Pigface.
Portland has a really good independent music scene, and it's accessible to underage kids. They've got the bars in the back, but the kids could still come in and see the show. Seattle should operate that way, it would keep the live music scene busy.
SS: The end of last year finds Post To Wire in everybody's best-of lists, and you were getting regular airplay -- was there a time when the attention started to freak you out?

Duby: Mmm, no. It was pretty exciting... what's strange is -- because l still work in a restaurant -- people will come in there and recognize me. I’ve worked there for four years, bussing tables and everything, there's nothing glamorous about that!
It's been hard to stay in that position, and at the same time, be changing as a person. You get kind of frustrated, you just want to tell people, I have a record out, dammit! The reason I've stayed there so long is the people who work there are so good, they're wonderful, but ...
SS: When you actually got down to recording the album, was it hard to contradict Steve Fisk, a producer with so much experience?

Duby: It was really difficult. Fortunately, there wasn't much I had to contradict him on. I mean, Steve's a great producer in the sense that he's good at helping artists access their own ideas. He's very supportive and open. At the same time, however, he's got strong opinions about the things he thinks will work ... he's got 15-20 years on me, so it was very intimidating at first -- he's pretty much a genius [laughs].
It was a daunting task for me to enter into, especially since I'd had no experience with electronic music -- I'd only been in a three-piece band, and that was only for a year and a half. It was difficult, but I think it was the only way I'd ever want to do it, because I learned so much.
SS: With lyrics that seem to be so personal, was it strange to get up in front of a room full of people and sing them?

Duby: I really don't think so, if you've done it enough in different venues. I don't really know of any music that isn't personal in some way... it pretty much comes with the territory. I do think it's been difficult to translate the album into a live project, because it was such a studio piece of work. The concessions and compromises you have to make when you deal with different people -- it's a totally different environment. I really don't want to do everything off of a DAT, and if we were trying to approximate the album's sound, that's what, we'd have to do.
The people in the band are my very best friends... they're wonderful people to work with, and it's been a very fun and positive experience. In terms of being the person in charge, and the person who's supposed to be running things -- which I don't necessarily do well -- it's been a real education, because I'm used to being by myself.
SS: I hear you've done some recording lately. Will you have a new album out shortly?

Duby: We're working on a split-EP with Elemental, which is Reggie Watts' live drum-and-bass project. We're going to be doing some touring this summer, and once we're done with that, I'll start working on the next album ... it won't be for a while yet.
SS: You'll be playing the Tractor soon. The Crocodile and the Showbox are your usual clubs -- are you a little nervous about journeying to the Wild West?

Duby: No, I'm actually excited. I really like Ballard, I like the Tractor, I think it's a great showcase room. It will be a nice change of pace.
SS: Since you started singing professionally, what's the best piece of advice you've gotten?

Duby: Stay in school [laughs], go to college. Doing this is not easy.
Heather Duby • Post to Wire • 1999 • SubPop Records