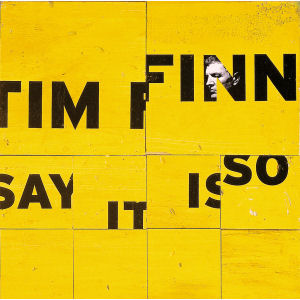 • An interview with Down Under pop icon Tim Finn


Tim Finn, you might recall, was the driving force behind Split Enz, a group known for its avant garde performances and songs such as "Dirty Creatures," "I Got You," and "Six Months In A Leaky Boat."
Tim brought his brother Neil into the band just as the sensation known as "New Wave" was starting to reach large numbers of American listeners; before Split Enz could fully capitalize on the trend that they helped create, the band dissolved.
Neil Finn shaped remnants of this influential group into Crowded House; Tim launched a solo career.
Darting and dabbling here and there for years, the elder Finn released infrequent albums, and immersed himself in critically acclaimed side projects. He rejoined his brother in Crowded House for one wonderfully moody CD, "Woodface," and also on the recent "Finn Brothers" effort.
The singer/songwriter's new CD, "Say It Is So," is undoubtedly his finest work yet. Recorded in Nashville with noted producer Jay Joyce, it's a refreshingly vital blend of his trademark pop stylings and offbeat, subtly complex musical landscapes. "Say It Is So" is the kind of recording that takes two or three plays to fully appreciate; after that, you're hooked.
Finn's slightly eccentric tendencies are well-documented, and I came ear-to-ear with the earnest individual who was, surprisingly, interested in talking about his fascinating past.
SS: In your press kit, you state that "Nashville was the last place on earth that I would ever have thought of going to record." How so?

Finn: Well, I only had the knowledge of the cliche of Nashville. I had never toured through here; like anybody else in our part of the world, we just think of it as a place where hokey, formulaic music comes from -- it's known as a music factory. You forget about the ancient past; the last 10-15 years have created this impression. That's an impression based on ignorance, really... it didn't seem like a place that has anything much to do with pop. Sometimes when you go to the least likely place, that's where you find exactly what you were looking for.
I guess the person I was looking for was Jay Joyce, but I wouldn't have known he was living here. I didn't know of him, I didn't know his work. I met him through a friend of a friend once we got here. Really, my wife and little boy and I came here on an intrepid adventure in a funny way -- I'd been trying to make this record in Australia, and I'd recorded 20 tracks and thrown them all away. I wasn't happy, and really didn't know where to go next, and a friend of mine said to me, 'You must go to Nashville.' It was a weird thing, it struck me the right way... but the first month or so here we weren't sure why we came.
SS: Do you find that you have to reintroduce yourself to mainstream America every time you come here?

Finn: Yeah, because I come here so rarely. I mean, the last time I toured here solo was about six years ago. I've done a Finn Brothers tour since then, and I've toured around with this Irish band called ALT. I've jumped around from style to style, band to band, and it would be hard to imagine that people would remember who Tim Finn is every time. I accept that, I'm not interested in careerbuilding. I've never actually thought of it as a career, it's not a career, it has no logic or path or payoff. I'm a songwriter and I've found incredible richness in my life in pursuing that; there have been times where I've been frustrated -- with Split Enz, all those years ago.
That was a band I believed in with all my soul and like with any band, you have the desire to conquer the world, be the best band -- if you don't feel that way, it's probably not worth continuing. But that was a shared quest; on my own, it's been more of a stumbling, rambling journey... and I've accepted that now, and I take what comes.
SS: Do you ever run into your contemporaries Down Under -- like Paul Kelly or Mental As Anything, or Men At Work anymore?

Finn: Oddly enough, I actually saw the guys from Mental As Anything just the other day. There was a big event in Sydney where they're trying to bring about some sort of reconciliation between the Aboriginal people and the European people... it's a terribly painful, protracted sort of thing that will go on for a number of decades, I'm sure. There was a big march across the Sydney Harbor Bridge -- maybe 200,000 people -- and there was a series of free concerts afterwards, and I was part of that with Mental As Anything. It was really good to catch up with those guys, I feel completely part of their world somehow.
SS: What's your position on reconciliation? Have you been actively involved in that issue?

Finn: Not a politically active part. As an artist, I've been asked to do several things, like concerts. I've grown to love Australia, though I'm a New Zealander. I feel a part of that place. I've met Aboriginal songwriters through the years, people like Archie Roach, Yothu Yindi; when you actually meet these people and have a chat with them, you begin to feel it.
SS: Everything you do is compared to Split Enz. I imagine you would get tired of people bringing up that experience.

Finn: Absolutely not. I'm not jaded about that at all. I love Split Enz, I love the fact that I did it. If people talk about it, that's great; if that's the greatest thing I ever do in my life. I don't agree, but that's fine if people think that. I don't have a problem, with any of it.
SS: Describe growing up in New Zealand, and the surroundings that shaped your early musical career.

Finn: There was always music in the house. I think we grew up knowing that live music was exciting, and that it tended to make people loosen up, go crazy, do things they normally wouldn't do. I'm talking about when I was a very young child; the whiskey would come out, there would be a guy playing piano in a corner of the room, stubbing out his cigarettes on the piano, because he couldn't stop to butt out his cigarettes. That kind of intensity of performance... women flirting with priests, parents letting us do anything we liked, that sort of subversion of normal roles... the energy and heat was not coming from the alcohol, but the music.
Falling in love with Beatles records, and hovering around the record player at school -- someone would bring in the latest Beatles record, and 40-50 boys would gather 'round -- that sort of intensity, a devotion to pop music... that's how I grew up. I played and sang live music in school and wherever I could.
SS: Your musical relationship with Neil has been off-and-on over the years, and there's always been speculation about an Everly Brothers-type feud... What sort of hurdles do you have to leap when the two of you collaborate on something?

Finn: We don't have tq leap any hurdles... if the time is right, and we both seem to know when it is -- and it isn't very often -- it just happens like magic. That's what it was like with 'Woodface' and the 'Finn Brothers' album, we worked up the songs very quickly, and we didn't have to struggle with themes or ideas, they just came up. I guess the timing is everything, there's no point in trying to force it or rush it. When we get in a room with our guitars, it's just so easy to tap in -- tap in to shared memories -- not that we sing about them, though sometimes we might touch on things that come from our past directly. Mostly, it's just knowing it's there like a wellspring, and then we can draw inspiration from it at ease. It's a very easy thing for us to do...
Eddie Vedder lives there in Seattle, right? We bumped into Pearl Jam in New Zealand once, got up and sang 'I Got You' with them, it was really a blast... I was just jazzed to get up and play some of those Split Enz songs with Pearl Jam, 'cause it was heavier than they'd ever sounded, and they sounded great.
Tim Finn • Say It Is So • 2000 • What Are? Records