O’Keefe still has the blues 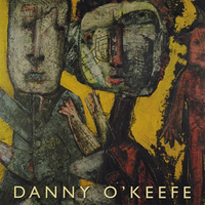 
Over the years, Danny O'Keefe's mystique has been amplified by his infrequent album releases. Of course, O'Keefe was, not exactly an instant sensation to begin with. After graduating from Wenatchee High School in 1961, it took this supremely talented singer/songwriter 10 years to finally capture the music industry's attention -- stepping up to the spotlight with the modern standard, "Good Time Charlie's Got The Blues" from 1972's Danny O'Keefe album.
O'Keefe followed that smash with 73's Breezy Stories, and its famous pulp fiction cover; six years passed before he reemerged with The Global Blues. His next, The Day to Day, was presented in 1984, and re-issued (and re-recorded) in 1989's Redux. This handful of recordings all had one thing in common: they were fantastic, with unforgettable, introspective songs sung with a unique, unforgettable voice.
The world has seen very little of this legendary artist over the past decade -- but his relative seclusion has recently come to an end. He's got another fabulous CD, Runnin’ From The Devil (Miramar) on the shelves; on May 2, he hosted a benefit for his Songbird Foundation in Philadelphia that featured Bonnie Raitt and Jackson Browne.
O'Keefe spoke to me via telephone from his Vashon Island home, where he was preparing for an upcoming Songbird benefit performance at the Tractor Tavern, which will also feature Colin Hay of Men at Work fame, as well as veteran power pop-rocker Tommy Tutone.
SS: Ten years is a long time to be absent from the public eye. What kept you busy in the '90s?

O'Keefe: For a period of time, I wrote for a couple of different publishing companies as a contract writer -- one of those companies was one owned by Bob Dylan. I wrote a song with him during that time, "Well, Well, Well," which is on my new CD. Five of the last 10 years, I worked in Nashville with other writers -- several of those songs are on the CD as well.
About three years ago, I started a nonprofit organization called the Songbird Foundation, to essentially deal with issues of sustainability, but particularly as they apply to the migratory songbird populations that in many cases are rapidly declining... and the relationship to coffee agriculture.
It sounds very complicated, but it really isn't -- when you cut down the trees in "coffeeland," you begin to lose birds, because that's where they go for their winter migration. It's part of a pattern that we see worldwide... most people are, or choose to be, completely unaware of it.
SS: How did you become interested in this cause?

O'Keefe: It kind of goes back to one of the fundamental works in conservation, Rachel Carson's "Silent Spring." There's a profound question that's asked in the context of this book, a question that I felt was being asked of me several years ago, which is: these other creatures, they provide delight in our lives, but more than that, they have a fundamental, existential right to be alive, and is it immoral to create processes that destroy their web of life?
If all of this was happening because of our appetite for coffee there seemed the potential... if you informed the coffee drinker about the choice of drinking sustainably (shade, or traditionally-grown coffee) and preserving habitat and helping people earn more than a subsistence living -- which are the coffee workers -- that people would pay a little more for a cup of coffee if they knew that would help that process. A lot of other groups are working towards this ideal, as well.
SS: How did Colin Hay and Tommy Tutone get involved in this benefit show?

O'Keefe: Tommy Tutone is an old friend of mine. We initially met through agents in common, and Tommy's agent now also works with Colin Hay. He suggested that Colin would fit in well in this showcase, and could help raise some money for the Foundation as well. Colin said, "Sure"... I haven't seen him perform by himself, I'm really looking forward to it. Men at Work's song, "The Land Down Under," is going to be the theme for the Olympics this summer, so were going to hear a lot from Colin Hay.
SS: Tommy Tutone is going to do an acoustic set as well?

O'Keefe: Yeah, he'll open, I'll play second and Colin will close the show... and in between, we'll try to tell people a little bit about the Foundation.
SS: You've been with a few different labels. How's your relationship with Miramar coming along?

O'Keefe: I'm a hard sell, because I have been away for so long. With this album, I didn't intend it to be one loaded with "hits" -- it's a personal experience, and it's always harder to sell something that's perhaps more intensely personal and not designed with a commercial intent. I think that Miramar's doing an admirable job, considering what they have to work with [laughs].
SS: Are you going to have a video on VH1 again? ("Along For The Ride," from Redux, was filmed around Conway, Wash.)

O'Keefe: I don't know if well do a video, I think the internet is the experience that we're looking for... perhaps a half hour concert.
SS: "Good Time Charlie's Got The Blues" is still being covered. To what do you attribute that song's longevity?

O'Keefe: It's two essential elements: it's very simple, and everyone relates to it. There's a certain inherent "identifiability," a truth, if you would, to it. It's almost like haiku, it's so simple -- although it's not as poetic as haiku. Everybody's had that experience, a dislocation. You come from, say, a peer group; and that peer group's started to fragment and go its own way, and you have to make a choice: which will be the road taken, or not taken.
SS: Was it a song that you wrote while you were preparing the Danny O'Keefe album or did you have it in your repertoire for awhile?

O'Keefe: "Good Time Charlie" is what essentially got me the deal with Ahmet [Ertegun] at Atlantic. I realized it was a piece of business fairly soon after I wrote it. It was one of those things where it was one of three songs that you audition for people, and that was the one that smelled like money to them. "Good Time Charlie" was never written that way, though; it was literally a gift that came through me in about a half hour or 45 minutes of just sitting there with a guitar, writing notes and... bam! there it was.
"Running From the Devil" • Danny O'Keefe • 1999 • Miramar Records
Originally published in the Ballard News-Tribune, Seattle, Wash., 2001.