Of tube radios and AM airwaves 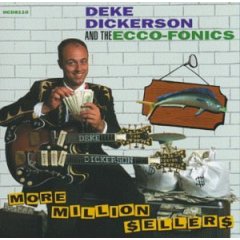 • A candid conversation with Deke Dickerson


Missouri native Deke Dickerson has the distinction of having garnered a cult following with three different groups.
In the late 1980s, his band Untamed Youth cut its own niche out of the then-underground surf/garage scene. Then, in 1991, he embraced his lifelong passion for rockabilly and classic country with the critically praised Dave and Deke Combo.
Following that group's breakup, Dickerson took that passion one step further. The singer and guitarist has released two CDs with the top-notch band the Ecco-Fonics ("Number One Hit Record" and "More Million Sellers"), putting his own unmistakable stamp on a sound that originated almost 50 years ago.
The singer and guitarist, like some sort of New Age channeler, taps into the pure vitality, the essence of early rock'n' roll and '50s country. The result is incredibly authentic-the only thing missing is the hum of a tube radio and the crackle of AM airwaves.
When I spoke to Dickerson last week, the band was en route to a gig in Kansas City, Mo. The band will be making a stop at the Tractor Tavern this Saturday night.
SS: Deke, with all of the legendary artists that you get to play on your CDs, you must be like a kid in a candy store?

Deke: As a kid, you'd never think you'd be able to hire the guy that did the 'Beverly Hillbillies" theme song to perform on your CD, but it's not that hard.
SS: Once you get started?

Deke: Yeah, as with the first CD, I sort of sat down with a list of people that I wanted on it, and I wound up getting everyone on my list.
SS: How did the duet with 86 year-old singer and actress Hadda Brooks, ["You're My Cadillac"] come about?

Deke: I've got a lot of Hadda's old records, and I just thought it would be a real kick to get her on the album doing a rockabilly sort of thing. I knew she was still kicking around L.A., and it really only took about two phone calls to get her manager on the phone. The next thing you know, she's down in the studio singing with me.
SS: Musicians like former Bill Haley and the Comets' saxophonist Joey D'Ambrosio and boogiewoogie pianist Carl Sonny Leyland make such an impact on your albums. Have you considered putting on an all-star show in L.A. where you could feature some of these people with the Ecco-Fonics?

Deke: I've tried, believe me, I've tried, but unfortunately, it's just impossible, everybody's got their own schedule. It's one of those things that you can assemble it in the studio, but it would never happen live.
SS: What are some of the musicians on your next "guest list"?

Deke: Acually, as much fun as I've had with the whole "guest star" thing, I definitely want to downplay that on my next CD. I've heard so many people -- critics, mostly -- that seem to think that if you have a good time, if you have guest stars and that sort of thing, that it's some kind of novelty act or something.
SS: Thats a load of crap.

Deke: Well, that's what I think, but what I'd like to do with the next CD is to get one really amazing guest. I'm actually trying to get Chuck Berry to do something with me, which is kind of funny because one of my old high school teachers here in Missouri is good friends with him, so we're working on him that way. If that works out, I'd like Chuck to do one song with me, and then have the rest of the album proving just how me and my band kicks ass on our own.
SS: Your recent tour with Mike Ness must have expanded your fan base some?

Deke: [Laughing] On this trip, we get at least 10 or 15 punk-rocker types per show coming up and saying, 'I saw with you with Mike Ness last summer, now I'm a big fan.' It's pretty funny.
SS: There's a song on your new CD, "My Name Is Deke." What's it like to have achieved a one-name status, like Prince or Madonna?

Deke: I tend to think of Cher... You know, the original band name was the Dekes of Hazzard, but we changed it because we had too many people saying, 'The Dukes of Hazzard.' 'No, it's the Dekes Of Hazzard,' we'd say. It's nice to be known by one name amongst a small circle, but it does me no good at the Taco Bell, you know.
SS: Your style is hard to describe in one sentence. I wrote recently that "Deke Dickerson manages to straddle that historical intersection of country, rhythm and blues, and early rock'n'roll." Does that come close?

Deke: Actually, I like that the best of anything I've ever beard, to tell you the Gods honest truth because that's what I listen to. People always try to make you into something -- country or whatever. I tend to think of myself as one of those guys like Carl Perkins was. He was a country kid who wound up listening to a lot of hillbilly records and rhythm and blues and came up with the whole rock'n' roll thing. I'm not saying that I'm an originator by any means, but I listen to an awful lot of country and rhythm and blues, and rock is sort of the end result.
SS: How do you account for the classic country/swing/rockabilly phenomenon?

Deke: I really can't account for it, all that I can say is it's been amazing to watch it grow. When I started the Dave & Deke Combo with Dave Stukey back in '91, we did a national tour and there was three or four rockabilly kids in every town, and that was about it. It's incredible how big of an audience there is for it now.
SS: As far as making country albums go, Nashville seems to have traded places with sections of Los Angeles.

Deke: I don't know what the hell Nashville is thinking. It all sounds like '70s lite rock or '80s pop... anything that has anything to do with country music: drinkin' and cheatin' and so forth, it's like a disease to them, they don't want any part of it. It's really weird, I can't understand it.
SS: How's the tour coming along?

Deke: The shows have been really good. We had one dud gig in Tampa, Fla., but I don't think anybody has a good show in Tampa. We've played at the Tractor before, actually, we've done, really, really well there. Seattle's one of our strongest cities in the whole U.S., so we're looking forward to gtting back there.
Deke Dickerson and the Ecco-Fonics • More Million Sellers • 2000 • Hightone Records