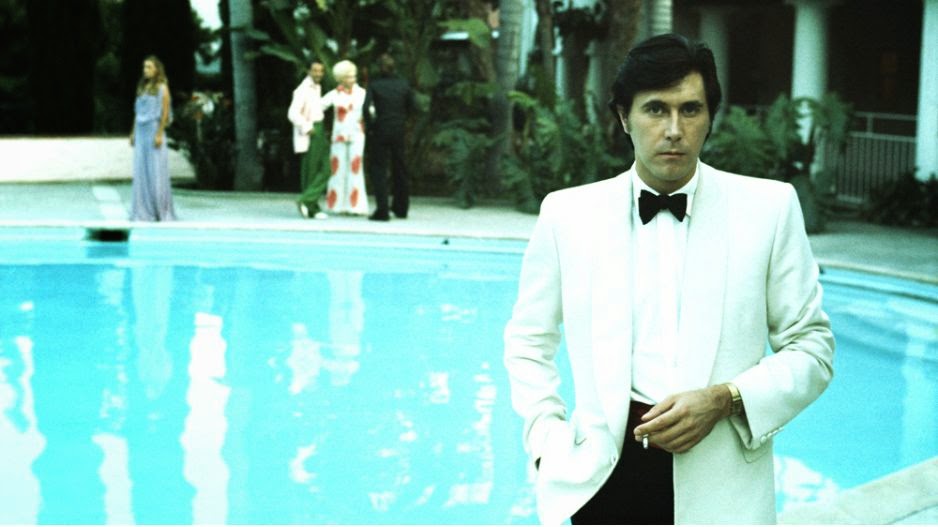 Some middle-aged folks went to a Bryan Ferry gig, and a 70s Roxy Music concert broke out.

The farmer's son-turned-musical aristocrat, playing a handful of Coachella-sandwiching U.S. dates, crammed a 42-year retrospective into a 100-minute performance Monday night.  For most artists, skimming over so many eras, leaning heavily towards the distant past in a decidedly "artist's choice" set - while disappointing very few - would be a minor miracle.  For Ferry, it was merely a matter of putting on a typically fantastic show.

In hindsight, it is to the icon's credit that he put his considerable charisma on the shelf for about a third of the evening, crooning behind a keyboard perched in a back corner.  In doing so, Ferry allowed his young (the youngest people in the room), aggressively tight band to take the spotlight... and in return, the eight-piece (including two great backing vocalists) paid enthusiastic homage to Ferry, Manzanera & MacKay.

Essentially the latest in a long string of Roxy Music cover bands who have backed Ferry's solo tours over the years, this outfit exceeded my high expectations.

Powerhouse uber-drummer Cherisse Oseie ran the show from behind her kit, delighting the crowd with her expressive, contagious enthusiasm. Danish guitarist Jacob Quistgaard tore up numbers such as "In Every Dream Home A Heartache" and "Ladytron," and added a touch of flamenco to the instrumental "Tara."

Seemingly stepping out of Roxy cover art and from Andy MacKay's shadow, Roxy touring veteran Jorja Chalmers was the breakout star of the evening.  Gorgeously draped in a retro black jumpsuit that could've been borrowed from a former Ferry flame's closet, the lithe Australian kept dazzling the audience via saxophone and oboe ("Remake/Remodel" and the aforementioned "Tara" were among many tests passed with flying colors), taking full advantage of both the excellent sound mix and the renovated opera house's great acoustics.

A dual threat, Chalmers - who was born in the year of Avalon's recording - also recreated Eno's knob-turning noises on synthesizer (yes, "Virginia Plain" was on the menu, and it was delicious).

The band wasn't restricted to rote re-creations, not at all.  Favoring muscularity and brevity over languid erotica, Ferry breezed through "Avalon," and led them through an uptempo "Slave To Love," a compelling update of his cover of J.J. Cale's "Same Old Blues," and a notably sparse "More Than This."

While the show was curiously light on the 80s and 90s (and on "solo" material), the surprise and spot-on inclusion of "Take A Chance With Me" from Avalon was a delight.  The audience creaked to their feet for "Love Is The Drug," and kept swaying for an extended encore that included the gloriously swaggering "Editions of You" and featured Ferry on harmonica for a frenetically hot "Both Ends Burning."

Altogether, it was the sort of set that evoked the enormity of the songwriter's brilliant back catalogue by what was not played, as much as by what was performed.

As for the icon himself, Bryan Ferry has the same panache, the same flair and grace that he has displayed for over four decades now.  Older, greyer, with a voice naturally aged but still quite serviceable, he's still a man of classic album covers and rumored dalliances.  Still the man without whom, a great number of New Romantics would've spent the 80s being a lot less romantic.

The thrilling night's only regret is that younger folks were pretty much in complete absentia.  People currently listening to musicians who were directly and/or indirectly influenced by Mr. Ferry and Co. missed an opportunity to be overwhelmed and educated. I suppose that's what Coachella is for, but a festival's marathon-for-the-masses is no substitute for an intimate, glamorous night with a true legend seemingly within arm's reach.
Posted by Steve Stav at 7:16 PM