50 Years of Wonder... And Counting 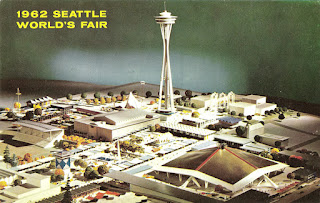 
As much as the Space Needle and the attractions that lay at its feet were unfathomably cool to a little boy from Minnesota in the mid-1970s, I sensed that something even more fantastic had once "happened" at the Seattle Center.

It was an odd feeling; hard to explain, but I remember having it like it was yesterday.  The buildings, with their awe-inspiring architecture, were hardly abandoned relics; they just seemed as if they were designed for something... bigger.  Even though half of the Jet City's population seemed to have already left in the "Turn Off The Lights" exodus of that era, there were still plenty of people to be found at the Center, especially on a summer day.  Having never been to Disneyland, I imagined the grounds to be as expansive as Walt's paradise — but I don't recall any long lines for the amusement rides, the Bubbleator, the new exhibits at the Science Center (save for the King Tut extravaganza that came to town in '78), the Monorail, or even for the Needle. 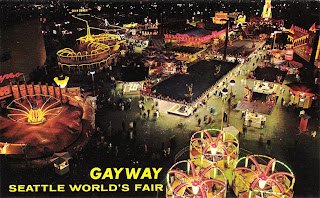 Of course, as I soon learned, all that space to walk around in was indeed the result of something grand once took place — the 1962 Seattle World's Fair, which opened its doors on April 21 and ran for six glorious months.  Months that changed a rather provincial, remote (by east coast standards) port city forever.

Launched at the peak of the "Mad Men" era, the Seattle World's Fair (aka The Century 21 Exposition) was — and still is — a dazzling reflection of America's pre-Vietnam, pre-assassination optimism.  With a heavy focus on space-age science education (a lure for federal funding and corporate involvement), it was truly a forecaster of future possibilities and probabilities; in fact, the future was occurring during the fair.   Seattle took part in a first-ever satellite transmission to Europe via the newly launched Telstar, and John Glenn — with his trusty Friendship 7, fresh from orbit — visited the fair.  Hi-tech cars and appliances, video phones, atomic energy... the list of exhibited marvels that were just beyond our horizon went on and on. 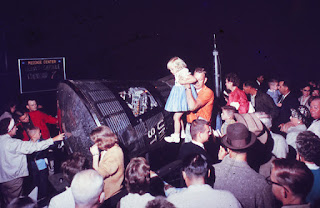 Technology wasn't the only theme of the fair, however.  An unprecedented explosion of culture occurred just north of downtown, with the world's best art, music, dance, theater, fashion and cuisine flowing through the fair for six solid months.  The Duke of Edinburgh, a phone call from JFK, Elvis and his movie shoot... though it had hosted the elegant 1909 Yukon-Pacific Exposition, Seattle had seen nothing like this.  Heck, the fair even offered a risque escape for weary-footed tourists and visiting dignitaries: a Vegas-style burlesque theater that included a bizarre, nude marionette act produced by Sid and Marty Krofft.

For all the marvels that the Seattle World's Fair presented, the behind-the-scenes tales of how it came to be — and how the fair impacted and inspired countless individuals — are just as fascinating.  Altogether, a multi-faceted achievement that couldn't be duplicated in the Emerald City of today.

This weekend, Intermittent Signals will feature the stories of two impossibly young professionals who seized incredible opportunities of a lifetime, when they were barely old enough to vote.  People who not only were there, but who helped make The Century 21 Expo a legendary success.

Tomorrow: JFK, The King, and It Happened At The World's Fair