I've built my dreams around you 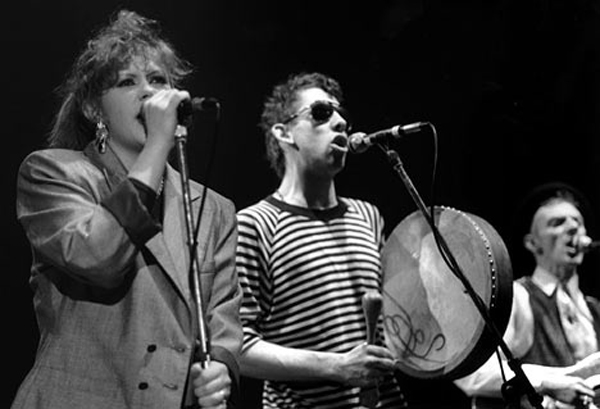 A tale of a stormy relationship between a woman and her eternally drunken louse of a lover, sung by a songbird princess and an infamously inebriated musical genius.
With such unusual subject matter, "Fairytale of New York" nonetheless became an instant Christmas staple 22 years ago. Captured on tape and film reel, this unlikely-yet-classic romance — with the Irish experience in America as a backdrop — has charmed millions on both sides of the Pond, including many who normally wouldn't include Pogues or Kirsty MacColl records in their cabinet.
And, as with the best Irish songs, one doesn't have to hail from the Emerald Isle to shed a tear over it.
One rare gem I've discovered this December is "The Story of... Fairytale of New York", a BBC documentary about both the song and equally epic video that helped catapult it up the charts at Christmas, 1987.
An all-encompassing study of the "Fairytale" phenomenon, the 2005 film is first-rate and faultless. It's centerpiece is bringing the Pogues together, for the first time, in the studio where their masterpiece album If I Should Fall With Grace From God was recorded. Around commentary from the band (if you wondered, in 1987, what Shane MacGowan would look like if he lived to the 21st century — here's your chance), the filmmakers weave the song's unusual origins, some interesting early footage of both the Pogues and MacColl, and inspired commentary by the likes of Nick Cave and Jools Holland. Famed producer Steve Lillywhite, MacColl's husband at the time, shows how the song was constructed while band members reminisce.
And, of course, there's the video. The documentary thoroughly examines the amazing clip, with recollections by actor Matt Dillon, set extras and members of the NYPD Pipe Band filling in for the fictitious "NYPD Choir."
Fittingly, this film honors the late, great Kirsty MacColl; in the wake of her untimely death in 2000, "Fairytale" has become her greatest musical legacy; "The Story of..." captures many sobering moments of remembrance from her family, friends and fans.
For Pogues/MacColl fans or for those who merely enjoy the song, "The Story of... Fairytale of New York" is a poignant must-see, particularly at this time of year. It's never been released on home video, but someone has painstakingly posted the hour-long documentary in six, high-quality segments on YouTube. So please steal ten minutes here and there and watch it, you'll thank me later.
Posted by Steve Stav at 9:20 PM