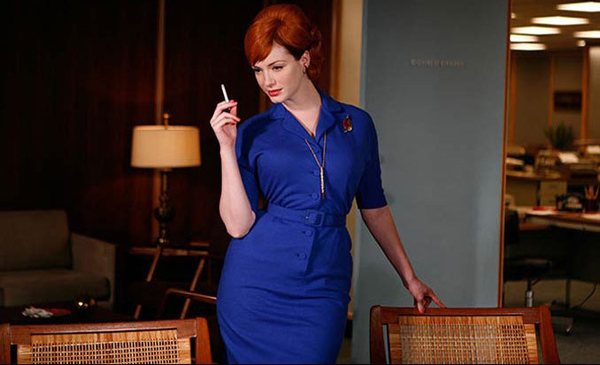 Don Draper, il castrato? Tell me it isn't so.

Mad Men's season three opener proved to be an eye-opener, on many levels. Mr. Draper's slow, uneasy and somewhat voluntary immersion into "family life" the reality, versus family life, the image, was strongly hinted at at the end of last season. Last night, we saw the coolest cucumber of them all almost revert to his not-so-old ways.

It's going to be a rocky road. Television's most intriguing character can't help himself; this major morality play — "Who is the Real Don Draper?" — will doubtlessly will weave it's way through the series' conclusion. My early vote is for Draper, the don't-look-back playboy — much more fun.

As far as the third season is concerned, it looks like Don will probably be keeping his pants zipped outside the home, which leaves someone in the office to pick up the slack in the sex department.

Will it be Salvatore? His closet is about to explode, given the frenzy of his almost-rendezvous. Now Draper is in the know, but the top ad man is keeping mum, naturally.

The limey acquisition of Sterling Cooper is a powder keg with a slow fuse; one of those sneaky fellows is likely to be tossed out a window by season's end. Speaking of windows, I expect Pete — now co-Head of Accounts — to either jump out of one or experience a complete mental break real soon. Then again, we've been thinking that since the show started.

As Mad Men slides deeper into the 60s, "progress" is indeed going to be painful, judging by last night. Thankfully, the gang has a few more years of repression, denial, womanizing, sashaying, hard drinking and chain smoking left to titillate their oh-so-captive audience. Who knew slow reform could be so suspenseful?