Prince Rogers Nelson, The Paisley Patriarch Who Thrilled A Generation 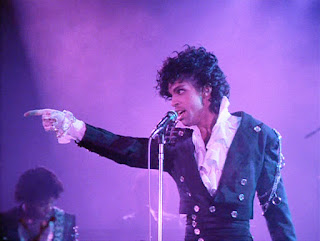 1984.  THE year for a lot of artists, but foremost of all, the year of Prince.  We went to theaters several times to soak up the Purple Rain phenomenon; the closest many of us would ever get to a concert hall to hear the man.  Overwrought and often downright bad acting by most involved, but we were young people, teenagers - and teenagers can never get enough angst.   The sheer electricity, the thrill factor could never be adequately conveyed to those who weren't of age at the time.

Later, with VHS and then DVD,  I'd fast forward to the "live" performances, fast forward to every appearance of Morris and Jerome, making a brief stop at Apollonia's skinny dip.  To this day, to this minute, Purple Rain never ceases to amaze me. Simultaneously a document of the era, and a musical presentation that transcends eras.

The news of Prince's passing has rocked Generation X especially hard, of course.  Upon hearing the news, I immediately called a dear, dear friend from high school to share the grief.  I've never heard an old Prince song without thinking of her.  Listening to tears flow, listening to her unnecessary but yet obligatory explanation of how much she could relate, in 1984, to Prince, and Purple Rain.  Mixed race.  Awful trauma at home.  The Revolution got her through some tough times.  The music still speaks to her.  Still speaks to a lot of people.  This was and is mood-provoking,  terribly intimate stuff, the stuff of genius.  Prince could make a heart race for four minutes, then break it for five… and then massage it back to working order.

It should also be noted, in a crowded 80s field, that Prince was an extraordinary crossover artist.  Not just from r&b to pop, but to alternative music as well.  The goth set, the new wave kids, the New Romantics… everybody loved these edgy, brazenly sexy sounds emanating from a paisley showman seemingly copping and bending and transmuting Hendrix, Sly & the Family Stone and Little Richard.

Prince was super-eccentric, moody, downright weird.  But cool, in his eccentricity, in his weirdness.  More than an icon, a way of life.  A style.

In remembering Prince Rogers Nelson, in honoring the man, it's befitting to play not only music from  his catalogue, but from the extraordinarily large Paisley Park "family" that he led, produced, showcased, wrote for, bankrolled and profited from as wunderkind patriarch.  Wendy & Lisa, Sheila E., Morris Day and the motherfuckin' Time… the roster goes on and on and on.  Controversies surrounding credits, contributions and money can be discussed forever, but the bottom line is a hell of a lot of artists owe a hell of a lot to Prince.  Some of them, everything.

Hell, a whole city is indebted to Prince.

First Bowie, now another giant(and one of the greatest guitarists) of my generation's creativity think-tank.   Stupefying.  Saddening.  Aging.  Fuck it; time to purify oneself in the waters of Lake Minnetonka.