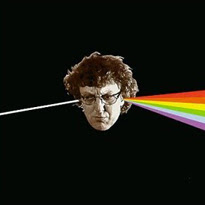 By Steve Stav, for the Ballard News-Tribune, Seattle, 2001.
The Squirrels are a crazy Seattle institution that, collectively, have evaded the oversized butterfly net of institutionalization for many years.
Just about everyone has been in the Squirrels -- from the Young Fresh Fellows and a Prudence Dredge expatriate to the Fastbacks' Kurt Bloch and members of the Posies and Dread Zeppelin. Inspired in part by co-founder Rob Morgan's obsession with the offbeat art-pop band Sparks and the theatrically-inclined Tubes, the Squirrels, like their ever-adapting name, have constantly evolved (or de-evolved) as members enter and exit the circle.
Rob (Capt.) Morgan's on-and-off band is the musical equivalent of the Seafair Pirates -- a loose group of talented musicians out to have a lot of fun without seriously injuring anyone in the process. The Squirrels' annual holiday shows are legendary -- memorable recordings parodying such unlikely subjects as John Lennon and the "Wizard of Oz" have attracted a small worldwide following. Their latest effort, a 2000 lampoon of Pink Floyd titled The-Not-So-Bright Side Of The Moon, is still garnering attention.
Last week, I spoke to Morgan (who outdoes Kevin Bacon in the six degrees game) about some of the events and characters that have contributed to his exalted status as Seattle Rock Icon.
SS: Let's start at the beginning. When did your fascination for the work of Ron and Russell Mael (Sparks) begin?

Morgan: Oh, like most people of my age, when I saw them on Don Kirschner's Rock Concert -- or it could have been In Concert -- they were on two or three shows about the same time, promoting Kimono My House (1974). It was unlike anything anyone had ever seen. Just about everybody on the Sparks mailing list my age tells the same story: they saw that and ran out and bought the album.
SS: The Squirrels have been around forever. How did the first incarnation get together?

Morgan: Well, I did the Pudz [notorious for their 1981 single, "Take A Letter Maria" b/w "Take Me To Your, Leader," recently included on an EMP/SubPop Northwest compilation] for a long time -- that folded up. I did the Pamona Boners -- that folded up; then I did the first run of Poplust magazine [his long-running publication] for a couple of years. Eventually, I decided that I wanted to get back to playing again.
About that time, I saw the Young Fresh Fellows at one of their first shows -- they had the sound and attitude that I was thinking of at the time. I cornered Scott [McCaughey] with the proposition of me joining their band as their singer; he hit me with a counter proposition of them just backing me under a different name. Basically, how it started was that when they'd go out of town, they'd take me with them. They would come out and open for themselves as the Mighty Squirrels, doing a bunch of covers with wigs on and stuff, with me hopping around. Half the time, the audience was too drunk to notice that it wasn't two different bands.
Eventually, they got rolling too good as the Fellows to keep this going -- me and Tad [Hutchison] wanted to keep going. That's when we drafted the late, great Eric Erickson [former schoolmate of Morgan's -- Morgan credits much of the group's musical diversity to him; Erickson passed away in 1996] on lead guitar, and we scouted around and found Joey [Kline] and Craig Ferguson, the bass player at the time, and changed the name to New Age Urban Squirrels and kept going. So it's been a gradual process of replacing people as they drop out ever since.
SS: So many local luminaries have been in the band over the years. Has any one of them proved to be wackier than you are?
Morgan: If there's ever been somebody that has scared me, if that's what you're asking, Joey can get pretty scary at times, when he's on a roll. I'm pretty used to him by now, though Baby Cheevers [a Cabbage Patch Doll that is somehow Kline's alter-ego ventriloquist dummy] gets pretty scary [laughs]. We're pretty fearless as a band. I've seen it all by now, about 35 [players] later. There's just a beauty and a freedom in the Squirrels that you don't find in a lot of other bands... nobody's taking things too seriously.
SS: What was the Squirrels' highlight show of the '80s?
Morgan: The Bumbershoot shows were pretty great. We played Bumbershoot several years in a row, we packed that joint. Once, we made a giant slingshot out of two microphone stands and some surgical tubing, and we shot Cabbage Patch Dolls out into the audience while the band played a heavy metal version of "I Dream of Jeannie" [laughs]. I think that's why they didn't ask us back much after that; they thought we were going to kill somebody with a Cabbage Patch Doll.
SS: What was the best thing about Seattle in the '80s?

Morgan: Oh, the fact that it was still pretty much under the radar and everyone could do whatever they wanted. There was a large enough scene to be an actual working, supportive scene, but it wasn't under the microscope and nobody had any illusions of "I'm going to get a record deal and be a rock star." Anybody who did think that way left and went to LA.
SS: What was the worst thing about Seattle in the '80s?

Morgan: Ironically, the worst thing is probably the same stuff as the best things about Seattle. It was a double-edged sword -- you were in a "big fish in a small pond" kind of situation. It was pretty much isolated from everything else. But as soon as Seattle did click, it ruined everything... every band from five states around that sounded like Pearl Jam moved here. All of the sudden, you're fighting with 1,200 bands over 10 rooms, with kids that are here to get into the music business.
SS: Not-So-Bright-Side Of The Moon was a long time coming. When and how did you get the idea?

Morgan: Eric and I used to want to do it... it was not long after the first album, in the late '80s. We thought the logical thing for the Squirrels to cover is an entire album. We thought of records to do, the first was Sgt. Pepper's, and we thought that was too easy of a call, that was off the list. We sat around and thought, Dark Side of the Moon, it had the most opportunities, the most things we could make fun of.
This album is the first album that we sat down and recorded everything at one time, with the same rhythm section and everything. We recorded it in 10 days [in 2000]. It was kind of a challenge... I was trying to make it appeal to people who like Pink Floyd, and make it appeal to who don't like Pink Floyd. I tried to play it straight down the middle. I think a lot of the humor is a lot more subtle than the blatantly jokey humor on some of our other records. A lot of the humor comes from the choice of a particular keyboard sound or whatever we chose to play. I think, musically, it's pretty funny in spots.
SS: How did [drummer] John Fleischmann become known as Hollis the Bug?

Morgan: [Laughing] That's a good story, too. Here's what happened -- he had just joined the band, he was 19 or something. We're doing a Halloween show, I think it was at the Crocodile. We decided to all dress up like different rock stars. Joey dressed up like Elton John, I think I was Alice Cooper, Mark Nichols was Rick Wakeman, and so on...
I remember looking for Hollis, we couldn't find Hollis. He's in the kitchen of this bar, and he's dyeing one pair of tights red in one sink, and one pair of tights black in another. He gets done with that, wrings them out and puts them on -- he's ripped holes in one pair so the color of the other shows through. He's got these wires and this Saran Wrap and he's making these big wings... he made himself this really dumb bug suit.
He's standing outside on the sidewalk talking to people between sets, and it's cold and raining and this suit's wet, and we looked at him and said, "Wow." When we introduced everybody, we said, "Here's Rick Wakeman and blah, blah, blah... and some kind of bug." We've called him Hollis the Bug ever since -- John's middle name is Hollis.