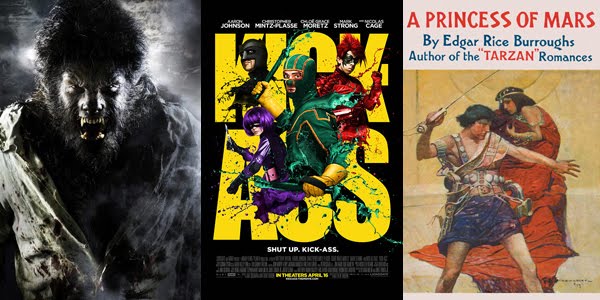 Though it's been planned, developed, discussed and brooded over for more than 70 years, Edgar Rice Burroughs' classic John Carter of Mars has never been brought to the big screen. However, someone's finally pulled the trigger, and principal photography has begun on a film adaption of the series.
The fact that Disney is the one with the trigger finger may or may not be cause for concern; apparently there is some backdoor Pixar involvement in this live-action flick, a potential big plus. On the minus side, the combination of Disney and its intended PG-13 rating means that Frank Frazetta's amazing, but highly erotic artwork won't be a stylistic template.
We'll have to wait and see if John Carter of Mars is a bold step for Disney, or something reminiscent of Island At The Top of the World...
In other flights of fantasy, I received the poster art for the upcoming Kick-Ass via email today. The comic book adaptation is supposed to be edgy as hell, but will Nick Cage be a contributor to the edginess, or serve as an unintended cheeseball counterpoint? Will we see the badass actor of the 80s, or the National Treasure, I-need-cash-to-buy-another-castle-for-the-IRS-to-take sellout? Again, time will tell... Kick-Ass is scheduled for an April 16 release.
Opening sooner is The Wolfman (Feb. 12), which I have high hopes for. Caught my first commercial/trailer recently, and I'm game. Hear that, studio? You've sold me. You don't need to air a half-dozen different commercials on various networks - a la Sherlock Holmes. You've got me hooked, don't lose me by airing every highlight of the film. Del Toro as the Wolfman... that's enough for me to part with 10 bucks. Of course, I'll probably be previewing this film for free, but you know what I mean. Just show a little leg, so to speak... don't give it all away.
Posted by Steve Stav at 11:50 PM